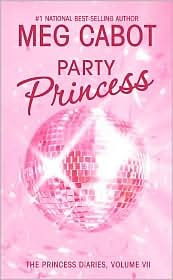 From Goodreads:
Princess just want to have fun . . . And Mia does too, despite the fact that the student government over which she presides is suddenly broke. But Grandmere's got a wacky scheme to raise the money, catapult Mia to theatrical fame, and link her romantically with an eligible teen bachelor who's not her boyfriend. No wonder Michael seems to think she's a psycho, or worse: not much fun. Is it possible that Mia, soon-to-be star of the stage, president of the student body, and future ruler of Genovia, doesn't know how to party?

My Review:
So this book was just utterly fantastic! I loved rereading this book, and the one big worry that Mia has in it-whether or not she knows how to party. Which gets her into a few situations, like the "sexy dance" with a guy not Michael. Yeah.

So because of the whole thing with economics, and the recyclers being more expensive then initially thought, the student government doesn't have funds for the rest of the year, even though they have some events coming up. So they come up with a student magazine, and Grandmere, with a play based on Genovia history!

So I had forgotten that The Guy Who Hates It When They Put Corn In The Chilli is named John-Paul or J.P., and while I know how that's going to end up, yeah, I had forgotten that was the name that they had for him! And Mia's stress because her story was based on him, and it ended badly for him!

This book had some high points, and some low points, like Michael and Lily's parents are divorcing, but yeah, all in all, there were some really great things happening for Mia, so this was a really great addition to the series!

I just loved rereading this book, and I can't wait to reread more!