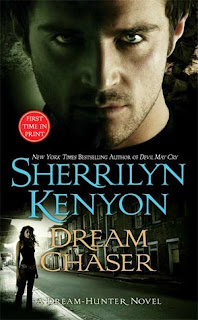 Xypher has one month on Earth to redeem himself through one good deed or be condemned to eternal torture in Tartarus. But redemption means little to a demigod who only wants vengeance on the one who caused his downfall.

Until one day in a cemetery...

Simone Dubois is a medical examiner with a real knack for the job. Those who are wrongfully killed appear to her and help her find the evidence the police need to convict their killers. But when a man appears and tells her that she’s more than just a psychic, she’s convinced he’s insane.

Now the fate of the world hangs in her hands...

It was bad enough when just the dead relied on her. Now’s there’s the seductive Dream-Hunter Xypher who needs Simone’s help in opening a portal to the Atlantean hell realm to fight insatiable demons. The future of mankind is at stake—and so is her life. The only question now is: Who is the bigger threat: the demons out to kill her, or the man who has left her forever changed?

My Review:
I just really enjoyed reading this book! Simone and Xypher were just so amazing to read about, I just wanted to have more! And I loved that twist about Simone's past, and how she is more then a psychic, because yeah, she is!

So Simone, she's the M.E. in New Orleans, one of them, so yeah, she has some interaction from characters from the first official book, Night Pleasures! Which was really awesome! I really enjoyed all that!

It really sucks for Xyhper. Because he's not the one that did that big, bad thing that was why he was with Hades. Nope, instead, he changed the memories of those involved, because he was in love with the lady that had done it. And he changed it so they thought he did it. And then she backed out of their bargain. But he got Simone, and she's going to get what's coming to her!

I just really loved that twist, that Simone was a demon, and that her family had bargained with Jaden to protect her, and yeah, we got to see Jaden again, and things are happening there, and yeah, that was just freaking great!

This was such a fantastic book, I enjoyed it so much, and I can't wait to reread more!