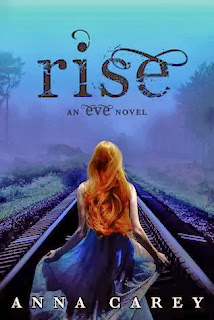 From Goodreads:
How far will you go when you have nothing left to lose?

When she lost her soul mate, Caleb, Eve felt like her world had ended. Trapped in the palace, forced to play the part of the happy, patriotic princess of The New America—and the blushing bride of her father's top adviser—Eve's whole life is a lie. The only thing that keeps her going is Caleb's memory, and the revolution he started.

Now, Eve is taking over where Caleb left off. With the help of Moss, an undercover subversive in the King's court, she plots to take down The New America, beginning with the capital, the City of Sand. Will Eve be able to bring about a new, free world when she's called upon to perform the ultimate act of rebellion—killing her father?

In Rise, Eve must choose who to leave behind, who to save, and who to fight as Anna Carey's epic tale of romance and sacrifice in the chilling dystopia of The New America comes to a stunning conclusion.

My Review:
Oh, man, this was a really epic book! Such a great ending to the series, and I enjoyed it a lot! I've enjoyed these books from the beginning, and while I'm sad now to say goodbye, well, they had a lot adventures in the 3 books that they had!

Eve's in a pretty hard place. Caleb is dead, and she's being forced by her dad to marry a guy she doesn't love, though cares about as a kinda-friend, for power. Not fun! So she has that to deal with. Oh, and she's also participating in a revolution to oust her dad. Busy.

I really enjoyed that part where Eve gets the girls out, and takes them away to where they're be safe, even though it's hard, and they're hurt and have few supplies. They do get pretty far, but then Eve has to go back. Because there's still things to be done.

And that ending! Taking down her dad, was just excellent! Eve's done this book without Caleb, so yeah, that ending, that he was alive, was just perfect! I knew he couldn't be gone! Really great and amazing ending! So good!

Rise is the ending of a series, but not of the reading of the author, because I can't wait for Anna Carey's next book!