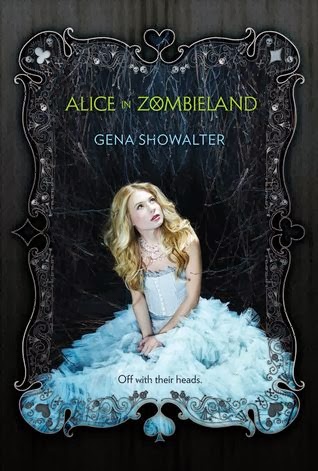 From Goodreads:
She won’t rest until she’s sent every walking corpse back to its grave. Forever.

Had anyone told Alice Bell that her entire life would change course between one heartbeat and the next, she would have laughed. From blissful to tragic, innocent to ruined? Please. But that’s all it took. One heartbeat. A blink, a breath, a second, and everything she knew and loved was gone.

Her father was right. The monsters are real….

To avenge her family, Ali must learn to fight the undead. To survive, she must learn to trust the baddest of the bad boys, Cole Holland. But Cole has secrets of his own, and if Ali isn't careful, those secrets might just prove to be more dangerous than the zombies….

My first review of Alice in Zombieland
My Review:
I loved rereading this book! The journey that Ali goes on, from believing her dad is crazy, loosing her family, and then learning how to fight the evil that caused it, and then actually fighting, that was just awesome, and yeah, I just loved it!

It has been just under a year since I first read it, and yeah, there has been a lot of books that I'd read since then. So while I remembered some broad strokes of the story, her parents, the zombies, Cole and them kissing on the dance floor-and her calling either kissing, or sex, "you know," which was just so darned cute, I had forgotten some things. Which kinda sucked, but all the more reason for rereading!

I felt really bad for Frosty, and Kat, and Reeve, between the zombies, and Kat's failing kidneys, they have a lot of secrets, things that some of them know, some things only one of them know, like Frost about zombies, until the end, and the fact that he knew about Kat's kidneys, since the slayers do background checks. And Reeve? She's kept from it all because of her dad.

Dr. Wright. Her. There was a there was a thing at the back of my head, a warning about her, that was pretty full fledged by the ending of this book, the memory of her betrayal, which sucks for the team, because they thought she was on their side, and she was she was helpful in keeping them in school, seeing as she was the principal!

This was just such a great, amazing, wonderful book, and I just can't wait to see where the series goes next to break my heart and build it back together again!