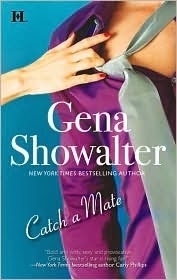 From Goodreads:
Jillian Greene is always getting caught in the act--it's her job Working at Catch A Mate, Jillian gets paid by suspicious wives to smile, flirt and prove that no man can be trusted around the opposite sex. Her only ground rule? She never gets physical. Until a heart-stoppingly gorgeous male walks in... Marcus Brody has just been hired as bait to test female fidelity. But the last thing Jillian needs is a partner...especially an infuriating, irresistible man who's got her fantasizing about tearing off his clothes.

Can a savvy modern woman find happiness with the most tempting man she's ever known? "Is" there such a thing as a totally monogamous male?

My Review:
Oh, I remember the first time I read this book! It was just utterly hilarious! And it was just as good this time! I loved reading it-and the cheesy pick up lines at the beginning of the chapters were really hilarious-it's such a great book!

Jillian was so awesome! She things guys are awful, her mom almost killed herself because she found out her husband was cheating on her-so she works for Catch A Mate, which exposes cheating guys. She wants to buy the business-but then Marcus Brody does. And that creates a lot of conflict-because there's sparks flying between them!

And then there's Jillian's friend, who's in love with Jillian's brother. And how that causes her to break down, cut her hair, and because of the contract, lose her job. But in the end, it doesn't matter because the two of them end together, and it's all good!

Yeah, this was a really fantastic book, bringing two people who don't believe that the other sex can be faithful, together! And I really hope that Marcus's friend gets a book and a happy ending, because that's been mentioned as a posiblity! That'd be awesome!