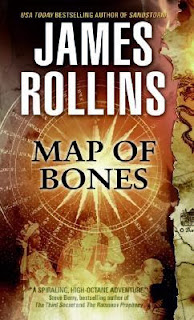 From Goodreads:
During a crowded service at a cathedral in Germany, armed intruders in monks' robes unleash a nightmare of blood and destruction. But the killers have not come for gold; they seek a more valuable prize: the bones of the Magi who once paid homage to a newborn savior . . . a treasure that could reshape the world."

With the Vatican in turmoil, SIGMA Force leaps into action. An elite team of scientific and Special Forces operatives under the command of Grayson Pierce and accompanied by Lieutenant Rachel Verona of Rome's "carabinieri," they are pursuing a deadly mystery that weaves through sites of the Seven Wonders of the World and ends at the doorstep of an ancient, mystical, and terrifying secret order. For there are those with dark plans for the stolen sacred remains that will alter the future of humankind . . . when science and religion unite to unleash a horror not seen since the beginning of time.

My Review:
Rereading this book was really quite fantastic! I mean, it's a James Rollins book, and it's the first one where it's Gray as the lead of the team, basically, and it's the introduction of Rachel and her uncle, and having read The Eye of God recently, and knowing what's going to happen to them, yeah.

I enjoyed the Magi bones, and while everything that went on to get them, well, yeah, bad things have to happen for the good guys to really know that something is going on, and to start up and do something about that!

And the the m-state metals, that was really interesting, what with the science behind it! And that it had something to do with the ancients, which leads them on a bit of a treasure hunt around the ancient wonders of the world? Yeah, that was great!

For some reason, I thought this book took place in England. But nope, it takes place in France! And yeah, to get into the place, to get to the front? Yeah, that was complicated! The beat the bad guy, but the pretty incredible collection of stuff was gone, which was too bad. But I loved that Painter cornered the bad guy running away!

I really enjoyed this book a lot, I can't wait to reread more!