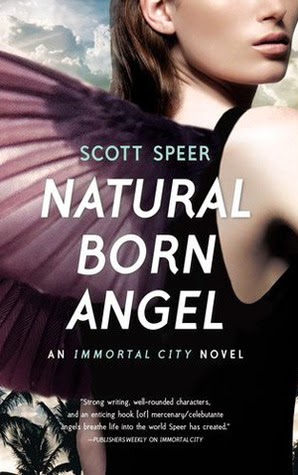 From Goodreads:
Life turned upside down for Maddy Montgomery when she found out she was half-Angel and was catapulted into the scene of flashbulbs, paparazzi, and the fervent adulation that comes with being in the celebrity Angel world. She's trying to juggle her ordinary life—high school, family, friends—with the intense demands of being in the public eye as heartthrob Angel Jackson Godspeed's girlfriend.

And now Maddy must face the most difficult choice of her life. She's been offered the chance to become a Guardian. This means entering into dangerous and high stakes training, with no guarantee that she can succeed. But more than that, it would mean leaving her mortal life behind—forever—and allying with the Angels at a time when their relationship with humans is heading for war. . .

My Review:
This was a really great book, and a great sequel to Immortal City! Loved being with these characters again, that was really great! And things just happen in this book, it's so good! Loved reading this book so much!

So Maddy is torn between her human side and her angel side. And as things in this world escalate, well, that choice gets harder to make. But she does choose to try to become a Guardian. And while it's a hard one, she sticks to it!

This book was a bit hard to read because they start pulling away from each other-they're both keeping secrets. And Maddy meets a guy, Tom, that teaches her how he flies, so she could apply it to how she flies. And Jackson gets jealous. And the tensions between humans and angels is coming to an all-time high-and they end up on different sides!

That ending, oh, that hurt! Because we want them to be together, after what they went through in the last book, and then this happens? Oh, it just makes me want the 3rd and final book now! Though the thing with Jackson's wings-and his new title name, which is where the title of the 3rd one comes from, Battle Angel-was a bit cool!

This was a really fantastic book, and I just want more now!