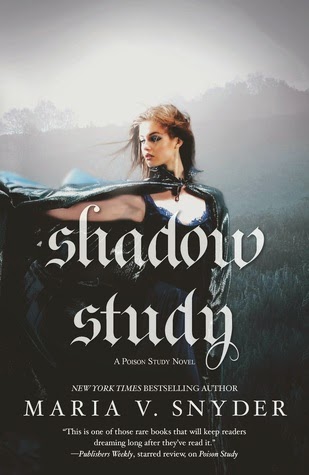 Once, only her own life hung in the balance.

Oddly enough, when Yelena was a poison taster, her life was simpler. But she'd survived to become a vital part of the balance of power between rival countries Ixia and Sitia. Now she uses her magic to keep the peace in both lands and protect her relationship with Valek.

Suddenly, though, they are beset on all sides by those vying for power through politics and intrigue. Valek's job - and his life - are in danger. As Yelena tries to uncover the scope of these plots, she faces a new challenge: her magic is blocked. She must keep that a secret - or her enemies will discover just how vulnerable she really is - while searching for who or what is responsible for neutralizing her powers.

Yes, the days of tasting poisons were much simpler. And certainly not as dangerous,

My Review:
I am so thankful that Maria V. Snyder decided to write more of Yelena and Valek's story and that it's getting published! Because they're just so awesome characters, ones that I'd spend any amount of time with because they are worth it!

So one of the main threads in this book, was a new smuggling route, even when we didn't know it, because it wouldn't be as good as it was if everything was known to be what it was pretty much right away! And I loved the various sides of the investigation!

Another big thread, was the loss of Yelena's powers. Because it's not good for her at all! And then the cryptic conversation with Moon Man's dad, Midnight's Son, combined with some other clues, gave me a pretty good idea what was going on there, and I was right!

It was just so awesome to read Valek's POV chapters! We got to learn about his past, meaning assassin training, and the names of his brothers (Vincent, 15 years, and Viliam and Vincent, 17 year old twins!) And having Valek hunt down those that killed them! And from when he started training, to just after he killed the king.

I felt really bad for Valek in this book-The Commander seems to be losing trust in him, from the various lapses in security, secrets kept, and then the discovery near the end? Well, discoveries? That was not fun at all, and I can't wait to see how this is all going to play out!

I loved this book so much! It was just so good, and that ending makes me want Night Study so, so, so much!

Author: Maria V. Snyder
Series: Soulfinders #1, Study #4, The Chronicles of Ixia #7
Read: November 5th, 2014
Source: NetGalley
Reason Why: I love Maria V. Snyder's writing, and it's a new Yelena and Valek book! Of course I had to read it! And it's a Prequel & Sequel Challenge 2014 Book and it's going to be a WoW Book!
Publisher: Mira
Expected Publication: February 24th 2015