Week 50 Review: Ever After 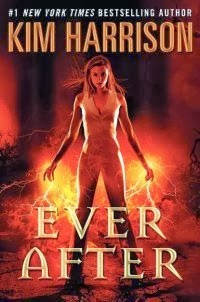 From Goodreads:
The ever after, the demonic realm that parallels the human world, is shrinking. If it disappears completely, so does all magic. It's up to witch-turned-daywalking-demon Rachel Morgan to avert catastrophe and keep life from changing... for the worse.

While saving the world is important, it isn't Rachel's only motivation. There's also the small fact that she caused the ley line to rip in the first place, setting off a chain reaction of unfortunate events. That little mistake has made her life forfeit unless she can fix it. It's also made her more than a few enemies, including the most powerful demon in the ever after—a terrifying entity who eats souls and now has an insatiable appetite for her. He's already kidnapped her friend and goddaughter to lure her out, and if Rachel doesn't give herself up soon, they'll die.

But Rachel has more than a few impressive and frightening skills of her own, and she isn't going to hand over her soul and her life without one hell of a fight. She's also got a surprise: elven tycoon Trent Kalamack. With this unlikely ally beside her—a prospect both thrilling and unnerving—she's going to return to the ever after, kick some demon butt, rescue her loved ones... and prevent an apocalypse before it's too late. Or, at least that's the plan...

My first review of Ever After
My Review:
I loved rereading this so much, it was just fantastic! Another big book, and yeah, I wonder if Rachel could go back, and not let Ku'Sox go, seeing as he kills Ceri and Pierce? Speaking of, I had forgotten that Pierce was with Ceri when she did that. And I had also forgotten Nick's part in it! Which made it worse when I got to that part again! I had forgotten how bad Nick had gotten!

I've really enjoyed watching Rachel go on this journey again, and yeah, I had forgotten how bad Al was at first, but we've really been seeing a better side of him as the books have gone on, yeah, that's been good for Al and Rachel's relationship!

When she infiltrates the museum, and how they actually did it, that was just so hilarious! Though it really sucked that the plan got changed on which set of rings that they were using, that wasn't too fun, But it worked out in the end!

Really enjoyed how Rachel, Trent, and Al worked together in the end, that was just pretty awesome! They worked very well together, and yeah, it's a good look at a potential future between demons and elves, so yeah, that was great!

Favourite lines: "'Barb!' 'Yeah?' 'Bull is looking for you.' 'What do you think I'm down here?'" Poor Rachel! And poor Barbie, who would name a child that? "I never liked the movie Titanic. They both could have gotten on that damn door." Yeah. And because they didn't, he died. It sucks! "Wait. Let's find something from your closet for you to wear. Then you can strike me." Nice being helpful, Newt! "Yeah,, he's a big badass stork that eats people." So you shouldn't be in awe! "'Besides, I'd be content if I could get an apology for you slamming my head into a tombstone and choking me half to death. 'Then I apologize.' 'And I accept. It never happened.'" This is just so cute! "I. Am. Yours. Claim me, Rachel! Damn your morals and claim me!" If they weren't fighting the bad guy, I'd think something of these words! "'You are hiding behind a stinking elf!' 'He smells quite nice.'" Nice comeback! And idiot Ku'Sox! "Then kill her and lets get it on with it. I tried already, and she hit me." Well, I think Ivy hit you, but you're the one that came up with it, so yeah! "'Sorry!' I cheerfully cried as I grabbed my fist and swung my elbow into the side of her head. It met with a thump and my arm went numb. Breath hissing, I got off her, scrambling to find Al and drag him away. I'd broke three broads with that move before, and Newt was down-for a moment at least. 'Oh, you're going to pay for that, itchy witch.' Al said, beaming at me..."Just love this! "Newt was laughing so hard she couldn't breathe, blood leaking from her ear as she sat on the ground and scooted backward to sit against a large rock. 'See!' she crowed, pointed. 'I told you she hit me!'"So cute! "Fixed on Biz, he didn't see Dali stick his foot out, and the demon face-planted into the dusty stones. Okay, maybe they had a favourite here, after all." Most definitely! "'And what am I to you, Al?' 'My maid.' he said brightly." That does not fit with all the nice things before! "We have a worm to crush!" Yes, go Al! "You don't really think water made the Grand Canyon, did you?" Nope, it was the demon/elf war! "Let go of me! Let go! I will kill him myself if you are all too afraid, and then you can put me on trial!" That would be good, but not as good as what happens! "But you're not a demon, Ku'Sox. Every demon here, every demon still alive has been a slave, has been hunted, even me. And you have not. You have never felt the anger of being made powerless, controlled, bought and sold. You have not. You have not felt the unfair lash, been pissed upon by those that call you animal, underling, an object. I think you need to be a demon before you can claim the right to a trial as one." Excellent speech, Rachel! "I want...I want one pure thing in my life. I want one thing I can point to and say, 'That is good, and it's a part of me.' I want you to keep what you can of the person you want to be. Don't sacrifice it for this. Don't let your desire for revenge give him the power to make you what you don't want to be." This is more evidence of what he feels for her!"But I was more than a little curious as to why we hadn't done it in his office or private apartments. Maybe he wanted to make s'mores?" So weird! "Al! Al! You're on fire!" This is just so hilarious! "'Oh my God! You're drunk!' 'No, I'm not. Wait, I am. Yes. I am drunk. You have no idea how hard it was to get to this mar-r-rvelous state of disconnection. Oh, look, there's more. This is elf wine!" Which is weird for her to see in Al! "What are you doing now? Seeing if your circumcision is gone? It is." That is personal, Al! "If I didn't know better, I would say he was babbling." Well, he's coming as close as he can, being Trent! "From behind the curtain, Al was either singing or crying. I couldn't tell." Oh, poor Al, and poor Ceri! "'She was forever waking me up in the morning, crashing the cupboard doors. The b**t.' 'She did that to me as well, every tie I tried to sleep in on the weekends. Then she'd smile at me as if she didn't know she'd woken me.' 'Crashing about. Making more noise than a box of squirrels. She did it on purpose, I tell you. On purpose.'"  They are finding common purpose in their mourning! "That is intolerable You must put yourself into the collective immediately so that we may converse!" I don't think the other demons would agree! "The old ways are ending. Embrace the new. Elves and demons living together. Oh God. We're all going to die." That's a downer! "'If it were up to me, I'd choose the hard path with the easy ending, not the easy path with the hard end.' 'What do you mean, it's not up to you?' 'What would you choose?' 'Me?' 'I want you to decided. Not because it impacts your species, but because I want you there with me. If you make the decision, you have to be there to help me with the fallout. Either they die naturally, or I continue the cure and the twenty-year battle to hide them until they can defend themselves. I don't want to be alone anymore, Rachel. And if you make the choice, you have to help me see it through.' 'I want

Loved rereading this book, (again, writing after reading) need to read more of the series!