Week 50 Reviews: Into the Woods, Trouble on Reserve 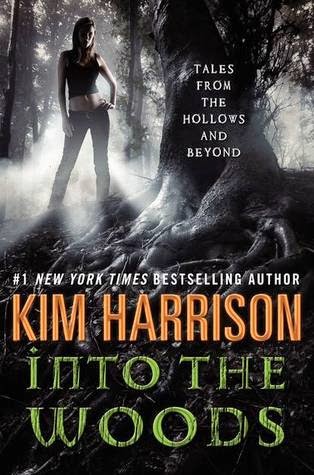 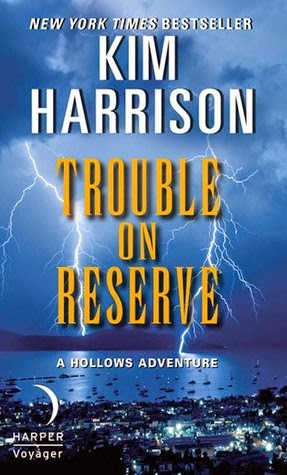 From Goodreads:
For centuries, the woods have been a pivotal part of the wonder and danger of fairy tales, for once you enter anything can happen. Elves, druids, fairies - who knows what you will find once you dare step into the forest?

And now, New York Times bestselling author Kim Harrison ventures into these mysterious, hidden lands of magic and mystery in her first short-story collection. Into the Woods brings together an enchanting mix of brand-new, never-before-published stories and tales from Harrison's beloved, bestselling Hollows series.

The tales her include an original Hollows novella, Million-Dollar Baby, about Trent Kalamack's secret elven quest in Pale Demon; two original short stories, "Pet Shop Boys" and "Temson Woods," that explore just what happens when humanity and the supernatural collide; and two novelettes, "Spider Silk" and "Grace," set in new worlds of imagination and adventure. Into the Woods also contains all of the previously published Hollows short stories - together in one volume for the very first time.

Step into the woods and discover the magic for yourself.

Including:
The Hollows
The Bespelled
Two Ghosts for Sister Rachel
Undead in the Garden of Good and Evil
Dirty Magic
The Bridges of Eden Park
Ley Line Drifter
Million Dollar Baby

New, never published Hollows short with Trent and Rachel working together. The timing of the story sort of puts it between A Perfect Blood and Ever After, but the feeling of it is seriously slanted toward Ever After. If you get a chance to read it, I'd [author] be curious to know what you think about the "voice." One of the things I tried to do–besides get a chance to see Rachel and Trent work together–was to give it a more mainstream feel since there’s the chance readers who would normally never pick up the Hollows might be reading it.

My Review:
I enjoyed reading both of these! Though truly, I only read from Million-Dollar Baby to the 4 non-Hollow stories, because while it was a collection of Hollow shorts, I'd already read them! And I did read Million Dollar Baby in the time it was happening with Pale Demon, but yeah!

Reading about how Trent and Jenks stole back Lucy, it was just so cute! I mean, they get to work together, and that takes a bit for Trent to really get in his head, but they make a good team once they do! And we get to be in Trent's POV! Which is really interesting!

Ah, when Trent pushed Rachel, and started fighting the assassin? Just so cute, because he knows they're her, and he wants to protect her! And it's just so sweet, and cute, and adorable, like him saying no, and growling, and I just want to get to the Undead Pool where things really happen between them!

Favourite lines from Million-Dollar Baby: "Wincing, Trent glanced past the pixy's fitfully moving wings to the attractive shadow of five-foot-eight inches of bothersome redhead vanishing from his elbow. Rachel Morgan was gone-never having fully materialized. Just as well. Her surreptitious ogling made him self-conscious. Then again. she'd never seen him in skintight spandex before." Nope! This is just so cute! "It's not a ring we are stealing. It's my child." That's something to say! "And you can't stuff them in your coat and run. though that's probably what Rachel would do." To a baby? "Your disbelief amuses me. But if you keep ignoring me, I'm going to stop you in your ear. Nothing permanent, but you'll lose some hearing from the scar tissue." Nice threat, Jenks! "Stealing babies. I can't wait to tell Rachel." I can't wait to get to the kissy bits! "You're scared about what you are going to do with a little girl, Mr. Most Eligible Bachelor Multibillionaire with More Money and Resources Than a Small City." Very true! "How Rachel did this for a living was beyond him. To be honest, thought, she didn't break into millionaires' estates very often-unless you counted the times she'd broken into his." All 3 times! "My God, he was down to beaning people with kitchen pans, but it probably wouldn't kill him." Beaning with kitchen pans! Love! "That was so sweet! We downed her with her own splat ball! Zip bang! She's out. Rachel would laugh her ass off." Very true! And so would a lot of people! "She just threatened to throw the next man who shoots you at the window. Megan is awake. She offered to help. God, Trent, what is it with you and women?" Go, Mrs. Withon!

Favourite lines from Trouble on Reserve: "I'm not going to do this. I am not going to get involved with a man ten times my tax bracket who deals in brimstone to fund his illegal genetics studies." Which is smart of you, except that Trent is perfect for you! "I'm still never going to work for you again-cookie farts." Such a bizarre name to call Trent! "Someone was standing in the road. Someone was just standing in the middle of the friggin' road!" Which is not too smart! "'Don't do this to me,' Trent breathed, almost frantic as he tried to get the engine to turn over, but the convertible was unhappy at being asked to be an off-road vehicle and refused to start." Love how that's described!
"Trent dove to the right and into the scrub. There was a flash of light and a pop of a silencer. My heart pounded, and a spike of satisfaction went through me even as Trent's  muffled cry came from the nearby ditch. He'd listened to me. The stupid billionaire had finally listened to me. I think it had just saved him a ton of hurt if not his life." And they're really starting to work well together! "Cormel was tired of waiting for his soul and had upped the pressure from talk to action. But why? I wasn't seeing anyone. Unless Cormel thought that T rent and I were, ha...Hand on my stomach, I slid a look over to Trent. He was angry, preoccupied with his thoughts as he helped me forward up the last of the incline. Trent? Trent and I lovers? Oh God. Trent was a big no-no. It was not happening. But I'd never seen him this angry before." But it is going to happen! And it's going to be spectacular! "'Anytime.' But that was exactly what I was afraid of." Which you shouldn't be, you guys are perfect together!

Enjoyed reading both of these, and must (writing this after I have) read more of this series!