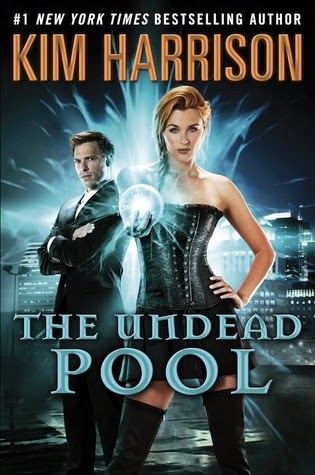 From Goodreads:
Witch and day-walking demon Rachel Morgan has managed to save the demonic ever after from shrinking, but at a high cost. Now strange magic is attacking Cincinnati and the Hollows, causing spells to backfire or go horribly wrong, and the truce between the races, between Inderlander and human, is shattering.

Rachel must stop the occurrences before the undead vampire masters who keep the rest of the undead under control are lost and it becomes all-out supernatural war. However, the only way to do so is through the ancient elven wild magic, which carries its own perils.

My first review of The Undead Pool
My Review:
Loved rereading this book so much! So much happens, Al doesn't approve of the finally there developing relationship between Rachel and Trent, we learn more about elves, and yeah, there's the pretty much the breakdown of the city, with the master vamps asleep!

What I want to say to Landon, is something along the lines of "Which species has a history of slavery, and which one ownership of slaves? Glass houses break faster when there's already cracks in the foundation!" Because yeah, you don't exactly have the best history!

And I didn't catch this the first time, I think, was that Nick is dead. I mean, when Newt and Rachel are having that conversation about her ley line, and Newt sends Al and Trent somewhere, and they come back, and Trent comments that Nick was gone, that the implication is that he's dead. I think, yeah, he deserves that quick, quite end to his involvement in the story, given all that he's done!

The whole thing with the mystics, that the demons don't believe in them, but that Newt does, because she went through something similar to Rachel? Yeah, there's that, and the thought that elf magic is more powerful then demon, not a nice thought, but oh, well! and the power the mystics gave Rachel, a bit, kinda, too bad she had to give it up!

Such a great, fantastic book, and now I can finally read (having already read this, and then this) The Witch With No Name! I'm so excited!