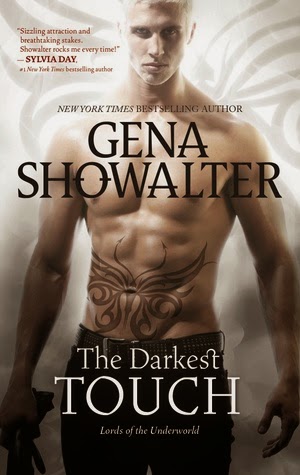 From Goodreads:
From New York Times bestselling author Gena Showalter comes the long-awaited story of Torin, the most dangerous Lord of the Underworld yet…

Fierce immortal warrior. Host to the demon of Disease. Torin's every touch causes sickness and death—and a worldwide plague. Carnal pleasure is utterly forbidden, and though he has always overcome temptation with an iron will, his control is about to shatter.

She is Keeleycael. The Red Queen. When the powerful beauty with shocking vulnerabilities escapes from a centuries-long imprisonment, the desire that simmers between her and Torin is scorching. His touch could mean the end for her, but resisting her is the hardest battle he’s ever fought—and the only battle he fears he can’t win.

My Review:
OK, this book has nothing to do with Alice in Wonderland, no matter that her title is like the bad guy from there. And while it's weird that her name is Kelleycael, oh, well! I just loved her and Torin's story! Because there's a pretty simple way to avoid his demon!

Gena Showalter said that she was almost done writing this book, when she scrapped it, and started over. And I'm thinking that in the original version, Torin was with Mari, which, yeah, if I'm right, makes me glad that the scrapping happened, because Torin and Keeley were awesome together!

Loved that Keeley is a Curator, a spirit, that is much, much older then Torin, that she has a time out box, to house memories! Though I really wish we could've found out more about them! And about the spirit thing-seeing as she has a body, that apparently, used to be Persephone's!

And like some of the things she knows, is why Zeus chose Pandora to guard the box, because of her curiosity, he wanted her to open it-because it contained more then high demons-it held The Morning Star, and oh, yeah, she knows how to use the 4 artefacts that the Lords have been collecting, together, as they were supposed to! So yeah, things happen in this book. Though on a slightly related note, Anya made the twins older! So precious! Oh, and apparently Sienna hadn't bonded with her power yet, so Keeley told her how, because she's just awesome like that!

Torin and Keeley just go back and forth with each other, being together, not being together, so much in this book, it gave me a bit of whiplash. And it was a bit hard to keep track of. But I just wanted to have more of their story! Because it was just so darned good!

Cameron, Winter, and Irish, the 3 prisoners in The Darkest Seduction, I forget if there was any mention of them after Sienna and Paris escaped, or if they were in the castle in the Realm of Blood and Shadow, or not, but they were imprisoned in this book with Keeley and Mari! And Torin lets them out! And then they come after Keeley, which Torin doesn't like!

Favourite lines: "Extraordinary. A living, breathing Sugar Plum Fairy, Dungeon Edition." Sounds a bit scary, but oh, well! "'As for random facts about me. My porn name is Doctor Miles Long. I would rather eat the Nephilim I captured than raisins. Sorry, Keys, but raisins are the result of nature taking a s**t.' 'My porn name is Ivanna Longone. And if you aren't careful, I will raise up an army of raisins and we will eat you.'" And I really think she could do that! 222, 245, 251, "Torin had dressed her in a ratty T-shirt that said 'Only One of These Statements is True Ba Gideon Never Lies.'" That is just too hilarious! Really love these shirts! "Anya is a crazy person who has spend the whole of her relationship with Lucien planning a wedding that's never going to happen. She's his non-fiancée fiancée." I love that Torin things the wedding isn't going to happen! "Maddox and Ashlyn made the mistake of asking Anya to babysit. My darling female placed the children in the Cage of Compulsion and commanded them to grow up a little." Oh, Anya, your brain goes to weird places! "I have a PhD is etiquette, sarcasm and fun ways to commit murder." That's a pretty wide range of things in one PhD! "'Children. Who were you challenging this time? Torin?' 'But, Daaaddyyy. We never get to hurt no one, and William promised we'd get a chance to do serious damage very soon as long as we didn't tell Momma. Well, it's finally very soon and we won't tell Momma. Honest.'" William, what are you doing? "'My friend called you Smurfette. You forced her to kneel before you and cut off her own flesh. Oh, and call herself Blood Mary.' 'Well, then, she got off lightly. I'll hear your thanks.' 'Then a few years later you forced Zeus to give you everything inside the royal treasury. A tax, you said, because you hadn't killed everyone he loved-only half of them.' 'That, I remember. He'd just attacked my fiancé.' 'Yes, the king of darkness!'" Nice things to do, Keeley! "We need to get the kids out of the fortress before she eats their hears for dinner and their spinal cords for desert!' 'Hey! Only eight times have I eaten the organs I've removed, and it was only to make a point.'" And probably not those of kids! "I am. I now, I know, You're honored to make my acquaintance, and you can hardly contain your excitement, but do your best to remain calm. I find bouts of fawning adoration embarrassing-for others." Go, Keeley! "'Are the Unspoken Ones strangers, Daddy?' 'Yes, sweetheart.' 'So I can hurt them?' 'Yes.' 'Oh, goody!'" Go, Ever! So cute! "'Dear diary. It's been three hours since I killed someone Needless to say, life sucks. My gorgeous fiancé refuses to let me kill the most loathsome creature ever. Won't even let me give her a few superficial stab wounds. I'm thinking about breaking up with him.' 'I wouldn't recommend it. He might not ask for you hand in marriage a second time.' 'Lucien. Tell him!' 'I'd ask again.'" Ah, the average day in the lives of the Lords of the Underworld! "'Would it be wrong to pound my chest like a gorilla?' 'Wrong? no. Entertaining? Yes.'" So cute! "'We'll have to postpone the wedding until my hair grows back.' 'Why and I not surprised?'" Because it's happened before? "'Kaia's been pestering me-I mean, asking sweetly. She wants to set up a playdate with Keeley. A girl's night out with murder, mayhem and crap like that.' 'I'll talk to her.' 'You're a lifesaver. But, uh, do it soon. Kaia's pestering-I mean, asking sweetly-can get painful.'" But it's Kaia, so you love it, Strider! "Play with fire. Always get burned. Play with Torin. Always get results." Awesome!

Such a really fantastic book, loved it so much, the wait for the next book is going to be evil, though here has been talk that we readers, may, may, get to vote on which 2 paranormal books couple's could be! Which would be awesome for us!