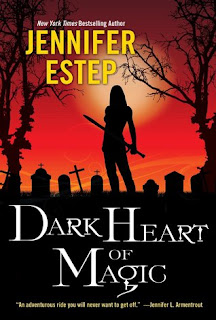 From Goodreads:
Something Wicked This Way Comes...

As a thief, I stick to the shadows as much as possible. But when the head of the Sinclair Family picks me to compete in the Tournament of Blades, there's no escaping the spotlight—or the danger.

Even though he's my competition, Devon Sinclair thinks I have the best shot at winning what's supposed to be a friendly contest. But when the competitors start having mysterious "accidents," it looks like someone will do anything to win—no matter who they hurt.

As if I didn't have enough to worry about, mobster Victor Draconi is plotting against Devon and the rest of my friends, and someone's going around Cloudburst Falls murdering monsters. One thing's for sure. Sometimes, humans can be more monstrous than anything else...

I did read the end before I was really into this book. It's a bad habit of mine, but sometimes, I just can't help myself! So knowing who the bad guy was in this book, well, I was able to watch for the clues, and that was just so great to do!

One thing that I really loved, was the mention of Pork Pit. I wouldn't have gotten the reference if I hadn't just read half of the Elemental Assassin series that's currently out earlier this week. I know that they can't be in the same worlds, because the magic of the worlds is different, but it was nice little reference! Loved it!

Yeah, so awesome to read this book, and now I'm just wanting the final book in the series!