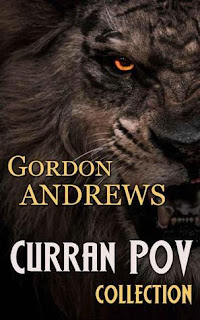 My Review:
This was a really fantastic collection of scenes and stories from Curran's POV! Wonderful to read, and just being in this world again was just pure bliss! And it brought back memories of what's happened through the series!

Starting with their first meeting, this collection of Curran's POV held moments that I think all fans of the series wanted-and some that they didn't know to want! Like, in one of them was a moment from Magic Slays, I believe, which lead to the car smashing, which was so great! (I wish we could've seen the smashing and the thoughts there!)

These POV's give us the why's of Curran's actions, which is something that I bet most fans would want to know, seeing as he's the hero of the series! So yeah, having those thoughts was one of the best parts of reading this!

Reading the stories of the start of Curran and Kate's relationship, of their courtship, was both special and just so funny! They got in a lot of situations, and we know how they reacted and Kate thought, but we didn't know Curran. And basically this review is saying the same thing over and over again!

Just fantastic to read these scenes and stories, and I would absolutely love more from later on in the story!