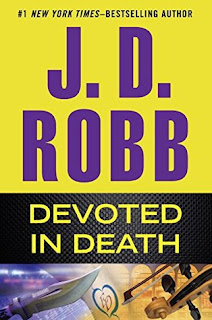 From Goodreads:
Eve Dallas tracks a couple whose passion is fueled by cold brutality in the newest crime thriller from the #1 New York Times–bestselling author of Obsession in Death and Festive in Death.

When Lieutenant Eve Dallas examines a body in a downtown Manhattan alleyway, the victim's injuries are so extensive that she almost misses the clue. Carved into the skin is the shape of a heart—and initials inside reading E and D . . .

Ella-Loo and her boyfriend, Darryl, had been separated while Darryl was a guest of the state of Oklahoma, and now that his sentence has been served they don't ever intend to part again. Ella-Loo's got dreams. And Darryl believes there are better ways to achieve your dreams than working for them. So they hit the road, and when their car breaks down in Arkansas, they make plans to take someone else's. Then things get messy and they wind up killing someone—an experience that stokes a fierce, wild desire in Ella-Loo. A desire for Darryl. And a desire to kill again.

As they cross state lines on their way to New York to find the life they think they deserve, they will leave a trail of evil behind them. But now they’ve landed in the jurisdiction of Lieutenant Dallas and her team at the New York Police and Security Department. And with her husband, Roarke, at her side, she has every intention of hunting them down and giving them what they truly deserve . . .

My Review:
Yeah, another book in the In Death series! Still going strong! And so enjoyable, seeing these characters again, like Eve with the hat and gloves from Mr. Mira (who's going to be a bigger character next book, yeah!) to the whole gang of characters we've grown to know and love over the course of this series!

We knew who the bad guys were right from the beginning. If you hadn't read the synopsis, well, then this book starts with their story, and it gave us the number of people they'd killed in reaching New York-27. So then having the feds think there was only 20 previous to New York, well, caused some frustrations!

Since they had killed so many before getting to New York, this book focused on a two pronged attack-looking for clues in the earlier cases, and trying to find their location in New York. Because evidence + suspects = them being arrested!

I do wish that the capture had been extended just a little bit, because there was only a few pages of it, more preparation then actual happenings, and I really wanted them taken down, and it was over so quickly, I wanted more!

Favourite line: "Why is S-A-S pronounced S-A-W? It should be Ar-Kansas. Did Kansas object?" I wonder about this, too! It's so weird! Or why isn't spelled Arkansaw? Spelling is weird!

Yeah, another fantastic instalment to this series!