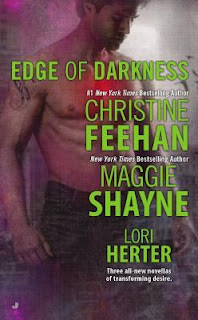 From Goodreads:
Take an all-new excursion in the world of the Carpathians from #1 New York Times bestselling author Christine Feehan—joined here by Maggie Shayne and Lori Herter, two other masters of vampire romance in an original anthology that takes dark fantasy to rapturous new heights.

Dark Crime by Christine Feehan
Blaze knows who killed her father and she has merciless plans for payback. Until a phone call from a seductive stranger pleads with her to wait. Retribution is in his blood, too. Now, he and Blaze will be united in the blood of the guilty. Tonight, vengeance is theirs.

Dead by Twilight by Maggie Shayne
Bloodsuckers may be an accepted minority but one of them is getting away with murder. Until a female vamp teams with a mortal detective to end the killing spree. Now the night belongs to them—and so does every pleasure and danger lurking in the shadows.

Cimarron Spirit by Lori Herter
While excavating an Anasazi ruin, archeologist Annie Carmichael uncovers the resting place of a centuries-old vampire who finds in Annie the liberating mate he has longed for. But how much is Annie expected—or willing—to surrender for the man she now desires?

My Review:
This was a really awesome anthology! I wasn't thinking of reading Dead by Twilight, since it's the 1.5 of a series that's a spin off series to one that I haven't read, but I did, because it was just so freaking good! I enjoyed it so much!

So I'm going to review the stories in the order that I read them in, because it's not the order that they were printed in! I read Cimarron Spirit first, because it seemed like the shortest, and because I was 50 pages in Dark Crime, and needed a bit of a break. I really enjoyed the story, it had a mix of modern elements, and of a bit old-fashioned, and I enjoyed the mix, and the happy ending, though I do feel bad for the daughter!

Dark Crime, I read the first chapter, and was really hooked! Because it's a Christine Feehan story. But then there were the romance elements, which usually in the first time I read the book, I don't get annoyed with the repetitions. But I did in this book, and it was just a bit annoying-if I read an excerpt of a love scene, without names (including pet names), it would be really hard to know which couple it was about. They're just so darned similar!

Dead by Twilight, I really enjoyed the beginning with the 60's language and events, then the transition to the now, and then the whole story, was just so great! Things happened, which made me really want to read all the other books in the first series, and then this series! I want to know more!

Yeah, really fantastic anthology, and I want to read more of these authors!