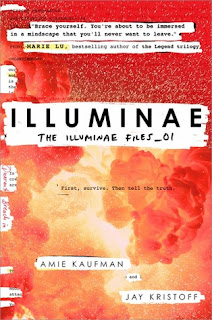 From Goodreads:
This morning, Kady thought breaking up with Ezra was the hardest thing she'd have to do.

This afternoon, her planet was invaded.

The year is 2575, and two rival megacorporations are at war over a planet that's little more than an ice-covered speck at the edge of the universe. Too bad nobody thought to warn the people living on it. With enemy fire raining down on them, Kady and Ezra—who are barely even talking to each other—are forced to fight their way onto an evacuating fleet, with an enemy warship in hot pursuit.

But their problems are just getting started. A deadly plague has broken out and is mutating, with terrifying results; the fleet's AI, which should be protecting them, may actually be their enemy; and nobody in charge will say what's really going on. As Kady hacks into a tangled web of data to find the truth, it's clear only one person can help her bring it all to light: the ex-boyfriend she swore she'd never speak to again.

Told through a fascinating dossier of hacked documents—including emails, schematics, military files, IMs, medical reports, interviews, and more—Illuminae is the first book in a heart-stopping, high-octane trilogy about lives interrupted, the price of truth, and the courage of everyday heroes.

My Review:
This book, it was just utterly perfect! Well, there was one thing, but that is hopefully because it's an ARC-I found it hard to read some of the fonts-or it could be me thinking that some of it should've been words, when was pictures using words and symbols. Some of both, I think!!

First off, the whole concept of a whole book told this way? That was just so awesome! I've read some similar things in Meg Cabot's Boy series, but this was different, because this is a YA Sci Fi book! So there were AI's, space travel that while broken took months. So it was pretty incredible!

Kady and Ezra, a broken up couple, on different ships, running from the bad guy, where a very big part of this story, even if they weren't together for almost all of the book-just the mentioned events at the beginning, and then the last few pages. They still could communicate, once they worked through some things! So awesome to read about them, Kady, computer code becoming-expert, and Ezra, a conscripted pilot. Just so freaking great to read about them!

Of course, for me, there were those similarities to Starbound series, after all, they're both YA Sci Fi series with one couple per book in a trilogy, with a company doing the bad, bad things, as well as being written by two authors, one of who is also writing the Starbound series.

There were so many twists and turns in this book! And what with the 3 major threats going on, the enemy warship, Alexander's AI, AIDEN, and the reason for the medical reports, well, there was a lot going on! Combined with all the twists and turns, well, brought this book up to a whole 'nother level!

There was a lot of gore in this book. First the fight for their lives on the home planet, and then the various threats that they face in the long journey to get to safety. Most of it wasn't described, but it was creepy, and there were a lot of deaths, the ones that hit hardest were the ones that we knew the names of. Which sucked for everybody!

AIDEN. While there wasn't much recorded about him in the beginning, after a certain point, he started getting a lot of page time-which made me conflicted. Because what he was doing, oh, boy, but this thought processes! I don't quite get the thought processes that made him do what he did after he was brought back online since it didn't make sense, even in a sacrifice the few for the many kind of way. If there was, I wants to know it! And we watched him experience things, and grow, and that ending, just, wow!

This book gave us some of the other places that similar events were going on, and the Goodreads synopsis' for the next two books tell where they are set. So we have a bit of an idea of where they're going to be, though the formate is going to be slightly different, seeing as I'm betting that AIDEN probably won't have any, or a significant role, unless it's right in the beginning, or closer to the end.

Yeah. Utterly fantastic to read this book, and now I'm just eagerly anticipating the next book!