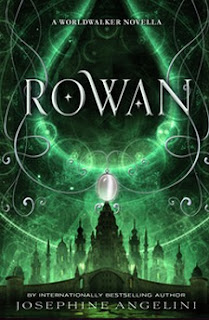 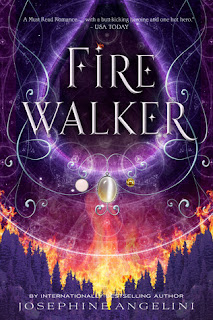 From Goodreads:
What game is she playing?
Rowan hadn't seen Lillian in over a year-not since she broke his heart and killed his father in one fell swoop-so why would she pick today to just show up outside his favorite coffee shop, dressed in outlandish clothes and pretending she doesn't recognize him. Is she turning to Tristan now in some pathetic effort to drive them apart? Why insist her name is Lily? And where is her Willstone? Her wild claims of being from a parallel world are just crazy and pathetic...right?

From Goodreads:
Worlds divide, magic slays, and love lies in the second book of Josephine Angelini's The Worldwalker Trilogy.

"You think I’m a monster, but my choices, as ruthless as they seem, are justified."

Lily is back in her own universe, and she's ready to start a new life with Rowan by her side. True, she almost died in the Pyre that fueled their escape from New Salem, and must hide her magic for the safety of everyone she cares about, but compared to fighting the Woven, the monstrous creatures inhabiting the alternate Salem, life is looking pretty good.

Unfortunately, Lillian, ruthless ruler of the 13 Cities, is not willing to let Lily go that easily. If she can't persuade Lily to return to her world, she will force her to come back by doing away with the ones she loves.


Picking up right where Trial By Fire left off, Firewalker is another sexy, fast-paced, heartbreaking thrill ride from internationally bestselling author Josephine Angelini!

My Review:
I was so thrilled to read these books! I love reading Josephine Angelini books so much, they're just so great, and these were no exception! So awesome, and so readable, and the covers are so freaking pretty! This is one case, where I'm glad that they changed the covers!

Rowan told the story of meeting Lily, and a few of the resulting events. And the start of him to maybe think that maybe he'd been in love with the Lily inside of Lillian, seeing as they are the same person, they just were born in different worlds. So that was really awesome!

Firewalker took place half in Lily's world, half in Rowan and Lillian's world. Which was really great, because there were things going on in both worlds. And as Lillian told parts of her story to Lily, things started to make sense.

Like, why she banned science, and hanged Rowan's dad first. She had a pretty good reason-not wanting her world to become a cinder world. And to not want Rowan to have to deal with a dad that, in another world, chopped off limbs for the group to eat in a way that the person kept living, so they could keep harvesting limbs until death. Yeah. Pretty horrible!

And that was a big mystery, and as it was going on, I knew that it would only end badly, and it did, but there were other things going on. Like the bombs that the rebels had, and the events that led out from that. And the Woven, and how they're more then they seem! I just want to know more!

And with that ending, I jut really need to know more! So cliffhanger-y, a city that nobody knew about! I needs more!