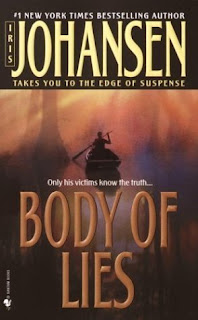 From Goodreads:
Eve Duncan, the signature character of #1 New York Times bestselling author Iris Johansen, thought her past was long buried. Until she finds herself tracking a killer so deceptive he leaves no trace behind—except for his victims.

Forensic sculptor Eve Duncan has been summoned to Baton Rouge by a high-ranking government official to identify the remains of an unknown murder victim. Eve wants nothing to do with the project. She has finally found peace from her own tragic past, living a quiet life with Atlanta detective Joe Quinn and her adopted daughter, Jane. Then a stunning series of seemingly unrelated events turns Eve's new world upside down.

Now, in a special government facility, she takes on the project of identifying the victim's skeleton. But she hasn't even begun when another death occurs. Someone totally ruthless, who can strike anywhere at any time and with seeming immunity, is determined to put a halt to her work, her life, and the lives of those she loves. Eve has stumbled onto a chilling conspiracy. There is only one person who can give her the devastating truth . . . and he's already dead.

My Review:
Oh, this book! It'd been a while since I first read it, at least 4 years, at least, probably more like 5-6. So while I didn't quite remember everything, there were some bits that I remembered, plus it helped that I read the end so I knew where things were going!

Joe made a pretty bad decision, in making Eve think that the little girl that they buried was Bonnie. He definitely pays for it in this book, because it's what the bad guy uses to get Eve to work on the skull away from him. But that doesn't last long!

Really fantastic mystery/thriller, things were happening, and that was just really great! All these twists and turns were happening, and I was completely caught in with all of them (though initially this book was a bit of a slow read, that's because I was reading everything else but this book!)

Really enjoyed that ending, with both bad guys known, and maybe taken care of! So that was really fantastic to read, and to be working for that next better life. Because hey, having that group that would shut down projects that would benefit humanity, just to keep their power, and doing what they did, being gone, yeah. That was great!

Yeah, fantastic book, and I can't wait to read more of this series! I need more, since the next book is coming out soon!