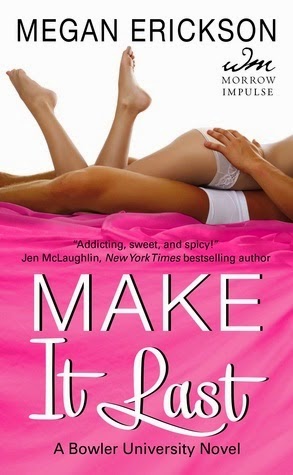 From Goodreads:
After graduating from Bowler University, the last place Cam Ruiz ever expected to find himself is his hometown. A bad job as a bouncer and worry over his mom's health make living in Paradise anything but. There's only one thing that can make his return any harder—running into the only girl he's ever loved.

Tate Ellison made a mistake when she was eighteen, one that cost her the best thing she’s ever had. She's always hoped the regret of losing Cam would fade over time. Too bad it's only grown. She took comfort in the fact she'd never have to face him again, so his presence in Paradise throws her for a loop.

The pull between them is instant and when the truth of what happened years ago tumbles out, they share a mind-blowing kiss...which leads to more. But the past has a way of repeating itself. When all the cards are on the table, Cam and Tate must decide what they are willing to do to make it last.

My Review:
This book was the shortest of the series, and it was the only one that didn't take place at Bowler Academy, though it did have the last of the house mates-Cam. None of these are negatives, they're just observations about the book. It made it different from the others!

Cam wasn't really in the first book. In the second, he was only in a few scenes. So having him full time was different and strange, and really enjoyable! I really enjoyed his story, and Tate's, because it was so freaking good!

Having the two of them, their stories, their lives, their problems, it was really interesting and fascinating to read! Yep, that was really fantastic. And knowing what had really happened in the past, and the reasons why, just made things all the more harder to read, because, oh, boy!

That ending was really fantastic, really sweet, and it was awesome to have everybody together in that last chapter before the epilogue, and with everything coming together, like, the perfect solution! So awesome, and yeah, just so enjoyable! Really great and awesome ending!

Yeah, really fantastic book, and I really enjoyed it, and I'm so glad that Max's brothers get books in the spin off series!

Author: Megan Erickson
Series: Bowler Academy #3
Read: September 19th, 2015
Source: Tuebl
Reason Why: I was supposed to be part of a review tour of this, but I didn't get a copy so I did a promo post. And it's a End of Series 2015 Book and a Prequel & Sequel Challenge 2015 Book.
Publisher: William Morrow Impulse
Published: January 6th, 2015