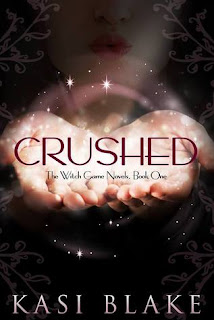 From Goodreads:
The Noah girls have beauty, powers, and brains.
They use all three to play their games.
They blow the dust,
the boys are crushed,
and no one is ever the same.

Each year the Noah girls play a secret game— Crushed. The rules are simple.

1. Use wisdom to pick your target. The boy can't be too weak or too strong-willed.
2. Blow the enchanted dust into your target's face to enchant (Crush) him.
3. Give verbal commands and assign them tasks to perform throughout the year. The more tasks completed, the stronger the witch's power grows.
4. At the end of the year, the witch with the most power wins cold, hard cash.

As if being a witch in high school isn't complicated enough, Kristen picks the wrong boy to Crush. Zack is tall, handsome, and a little scary. Her Crush spell isn't working on him like it has with the others. In fact, he is behaving the opposite of every other boy she's Crushed, hating her instead of adoring her. Something is definitely wrong. After someone attempts to kill her, Kristen realizes there is more at risk than a few hundred dollars. She may be betting with her life.

My Review:
This was a really awesome book! I enjoyed it a lot, it was just really great to read! I mean, this world of witches, and this game that these sisters had, that while I didn't like the game itself, or the idea of it, well, watching it play out was pretty awesome!

The relationship between Kristen and Zack was different. Because he wasn't her type, and she wasn't his, and yet they also made sense, even if she didn't know about him having magic, though he knew about hers. So when revelations came around, that was pretty fun to read!

Kristen's family, well, yeah. Her sisters, there was some trouble there, and while I knew some of it was because of the bad guy, but still. The dynamic there was a mix of good and bad, because siblings fight, but they seemed to take it a bit too high sometimes, you know?

I did have some problems with this book. Like everything seemed too perfect. Like hey, meet a guy, have all this stuff happen, and then have this happy ending that just seemed too easy, too perfect. Also, the world wasn't quite fleshed out-why and how does being accused of being a witch take away said witch's powers? That wasn't explained.

I really enjoyed reading this book though, really nice and awesome to read, can't wait for the sequel!