Week 38 Review: After the Red Rain 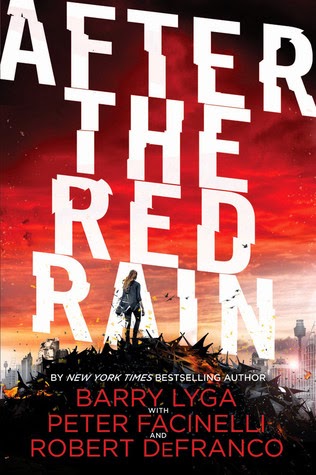 On the ruined planet Earth, where 50 billion people are confined to megacities and resources are scarce, Deedra has been handed a bleak and mundane existence by the Magistrate she works so hard for. But one day she comes across a beautiful boy named Rose struggling to cross the river--a boy with a secretive past and special abilities, who is somehow able to find comfort and life from their dying planet.

But just as the two form a bond, it is quickly torn apart after the Magistrate's son is murdered and Rose becomes the prime suspect. Little do Deedra and Rose know how much their relationship will affect the fate of everyone who lives on the planet.

My Review:
This was a really fantastic book! It did have flaws that I'll explian, but it was really great to read! Different, and just a little bit scary that the Red Rain-and what that turns out to be-could happen to us. Because we do have a huge population!

So a bit flaw was that some things weren't connected. Like the prologue, and who that man was, didn't connect to the rest of the book, because while Deedra has evidence of it (her scar, the necklace) she doesn't remember.

There was also a lot going on. This was a pretty big book, so it felt like too much going on, and not enough information on what was going on, that the above kinda explains. So yeah, there was that going on.

But enough of the negatives! These were some really awesome characters, and their situation was pretty messed up-like when the guy was interrogating her, and she says plan, and he takes it as the spy meaning, instead of green living stuff, yeah. That was going on.

Just a really enjoyable and great story with a pretty great ending!

Authors: Barry Lyga, Peter Facinelli, and Robert DeFranco
Read: September 17th, 2015
Source: NetGalley
Reason Why: I read an excerpt of it, and it was fantastic, and it's a 2015 Dystopia Book and a SAC 2015 Book!
Publisher: Little, Brown Books for Young Readers
Published: August 4th 2015