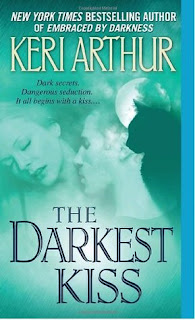 From Goodreads:
Danger turns her on.
Desire turns her dangerous...

Riley Jenson hunts evildoers—and does it with a style all her own. With vamp blood coursing her through her veins, and a werewolf's uncanny instinct for danger, Riley wears snakeskin stilettos and pure, in-your-face attitude when she plunges into her latest case: hunting down a killer whose victims are high-society strumpets—and the rich and powerful men they've dated.

But for Riley, the case takes a chilling turn when a second killer starts trailing mutilated bodies of his own: a crazed young vamp choosing victims from a past marked by tragedy. Riley knows she's got the skill and cunning to catch two serial killers at once…until one of them strikes inside her own tight-knit clan—and a sexy beast of a vampire reenters her life to aid in the hunt. His name is Quinn. He's lived forever, shed blood, and shared pleasure…and he's the only man over whom Riley has absolutely no control…

My Review:
Loved reading this book so quickly after reading Embraced by Darkness! Riley is healing from the break with Kellen, but that doesn't mean that she's doing nothing! Because she's also learning to fly, while taking on two different, but both very dangerous, cases!

Yeah, Quinn's back! He doesn't have a lot of time in this book, but boy, was it great to see him again! Knowing some spoilers for the rest of the series, well, yeah, having him back was just fantastic! He and Riley really click!

These cases were connected. But it didn't look that way, because of the different methods that were going on. And it's not like these murderers knew that they were connected, because well, one was a cat and that cat went after anyone who betrayed her mistress, so not so easy to connect those murders to the guy that killed said mistress! Yeah, Riley and the gang have a lot to face in this book!

Riley learns more about soul mates, and that Kellen wasn't hers. Which is great, in some ways, that she didn't lose that. But the fact that she is half vampire, half werewolf, well, that opens things up to Quinn!

Loved reading this book, and I can't wait to finish this series, and start the spin off one!