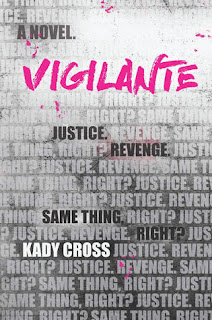 From Goodreads:
A brutally honest, uncompromising story about a teen girl who decides to take matters into her own hands.

It's senior year, and Hadley and her best friend, Magda, should be starting the year together. Instead, Magda is dead and Hadley is alone. Raped at a party the year before and humiliated, Magda was driven to take her own life and Hadley is forced to see her friend's attackers in the classroom every day. Devastated, enraged and needing an outlet for her grief, Hadley decides to get a little justice of her own.

Donning a pink ski mask and fueled by anger, Hadley goes after each of the guys one by one, planning to strip them of their dignity and social status the way they did to Magda. As the legend of the pink-masked Vigilante begins to take on a life of its own, Hadley's revenge takes a turn for the dangerous. Could her need for vengeance lead her down a path she can't turn back from?

My Review:
First off, I want to say that I'm not an expert in this subject. These are just my opinions and feelings about this book and the subject of rape/sexual assault it covers. I've never experienced it, myself, I've only read the news and books like these. And it makes me want to change the world. Maybe I can't change the world, but maybe, hopefully, I can do my part to help do so. Because this needs changing!

I have a lot to say in this review. Because this whole subject, sexual assault and rape, it's infuriating that it happens in the first place, it's one of my buttons. It might not have happened to me, but that doesn't mean it isn't wrong. It is. And I can be angry that it happens. And yes, the system is flawed. It's up to us to make it better-but not by being vigilantes.

One of the thoughts that Hadley had was that she didn't think much about sexual assault until it happened to Magda. That we think that it won't happen to us. And that's true. And it sucks that it takes it happening to make people think about it, about how to defend themselves, and why some people out there are horrible human beings.

Most of what Hadley did, the main things, were taking vengeance on the 4 boys who raped and ruined her best friends lives. That's the wrong side of being a vigilante. The right side was when she prevented assaults and rapes from occurring.

Honestly, I don't get how rape is the only crime where the victim is blamed. By going with Drew, it was Magda's fault. By wearing provocative clothing, for getting drunk, for having a crush on the guy before anything happened, for doing something that invited the rapist to rape you. And it's the only crime where that happens. And as a society, we need to change this perspective.

Violence isn't the answer. Education is a good one, teaching people to defend themselves is another. And again, changing society so the victim isn't blamed. It's easy to cheer on vigilantes, but there's a difference between stopping a crime and going seeking out to stop a crime. Vigilantes aren't hired by an institution to protect citizens. Maybe if there was training and But like I said, I'm not an expert!

This video explains what shouldn't have to be explained. But the more educated people are, hopefully, the less often, maybe even never happening again. Unlikely, but a girl can hope! So here's to explaining consent using tea.


And to end off this review for this amazing book, a quote from Detective Diana Davies, page 159. "The best way to prevent sexual assault or rape is to not assault or rape anyone."