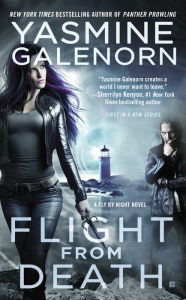 From Goodreads:
From New York Times bestselling author Yasmine Galenorn comes an all-new series set in the realm of her Otherworld novels.

I'm Shimmer, a blue dragon shifter. Thanks to a mistake, I was exiled from the Dragon Reaches and sentenced to work for Alex Radcliffe, a vampire who owns the Fly by Night Magical Investigations Agency. Now, not only do I have to adapt to Earthside culture, but every time I turn around, somebody's trying to kill us. And worse, Alex is as gorgeous as he is exasperating. But you know what they say: All's fair in love and bounty hunting…

When an old friend of Alex contacts him about a haunting at the High Tide Bed & Breakfast in Port Townsend, Washington, we think we're on a simple ghost hunt. But our investigation quickly transforms into a deadly fight as we uncover an eighty-year-old murder, a cursed house, and a dark force trapping the spirits within. To stop impending disaster we must break the curse and lay the angry spirits to rest.

My Review:
This book was so exciting to read! When I first came across Yasmine Galenorn last week, I saw this series, and it looked so fantastic. But since it was a spin off, I had to read the original series first, and I'm so glad that I did, because it made reading this book all the better!

Shimmer and Alex were really fascinating to read about! The dragons in this series are absolutely incredible, and Alex, a vampire owning an investigation agency. And that we were introduced to them in Flight from Hell, yeah, that was just the cherry on top!

It was a bit weird being in this world, not really worrying about Shadow Wing. This was more mystery focused book, vs. the mystery and action of the original series. And yeah, that difference was good, it still was strange! Loved it!

This is the full start to this series, and wow, it got off to an amazing start! It was just so enjoyable, and there was so much going on, it was such an entertaining and thrilling read! And yeah that we get more, which I can't wait to read!