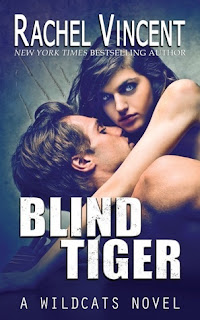 From Goodreads:
Robyn Sheffield wants her life back.

As the only female stray in the US, she's had to deal with bloodlust, flashbacks, a lack of impulse control (which might not have anything to do with being a shifter), and weeks under house arrest for crimes she never meant to commit. But when she overhears the territorial council plotting to marry her off to an eligible tom? It's time for this chick to fly the coop.

He's spent the past year carving his territory out of the Mississippi free zone, forming a community for strays exiled and forgotten by the US Prides. As the first stray Alpha, he's sworn to bring the toms under his authority the rights, support, and respect that official confirmation from the council will bring. But then the council's precious female stray sneaks into the free zone in the back of his car and demands sanctuary.

The council gives Titus a choice: send Robyn back and have his Pride acknowledged, or prepare for war. Citizenship for his men is within his grasp. So why is it so hard for him to let one rebellious tabby go?

My Review:
I loved reading this book! It was so fantastic, and I absolutely loved Robyn and Titus' story! This book was different, as it's the first to have narration from a Stray, because we never had Marc's POV that I can remember. So yeah, on top of that, we had narration from two Strays!

This book was different in a lot of ways from the first one. Because it mainly takes place in what Titus is establishing as his territory in the Mississippi free zone. And all of the main characters are Strays, because Abby and Jace are off at a wedding for most of this book! So we got to met a lot of characters that I hope will have books in the future!

I really enjoyed this mystery, it was a bit hard, having his brother on the line, but Titus was determined to protect him at the cost of the control over what he'd been working on for so long. The brotherly affection was strong!

The Alphas really need a kick in the butt, most of them, to bring them to the present, because things are changing. And with Robyn, there's hope for a different future, but they weren't looking that far ahead, that that's going to cost them! And it started to already, in Robyn's running away, and in that ending which was so fantastic!

This book was absolutely amazing, and I can't wait for more of this wondrous series !