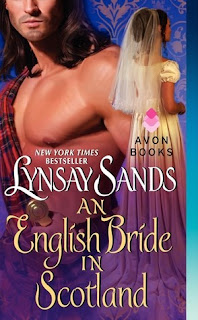 From Goodreads:
The first in a new historical series set in the Highlands of Scotland, from Lynsay Sands, the New York Times bestselling author of the Argeneau vampire series and countless historical romances.

Annabel was about to take the veil to become a nun when her mother suddenly arrives at the Abbey to take her home… so that she can marry the Scottish laird who is betrothed to her runaway sister! She knows nothing about being a wife, nothing about how to run a household, and definitely nothing about the marriage bed!

But from the moment Ross MacKay sets eyes on Annabel, he is taken with his shy sweet bride… and the fact that she's blessed with lush curves only makes him utter his own prayers of thanks. But when an enemy endangers her life, he'll move the Highlands themselves to save her. For though Annabel's not the bride he planned for, she's the only woman he desires…

Why the time hasn't come yet...
I dunno, I only just recently found Lynsay Sands as an author, and I'm on a Sci Fi/Paranormal kick right now. But hopefully I'll be able to read it soon! What about you guys? Happy reading!
Posted by Louisa @ Words I Write Crazy at 6:00 AM