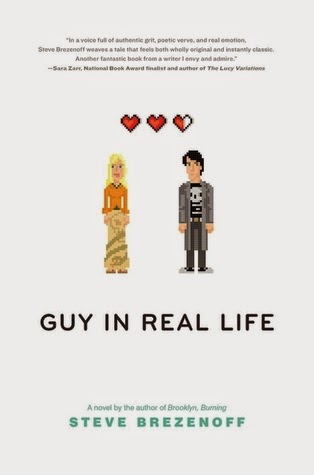 From Goodreads:
From the acclaimed author of Brooklyn, Burning comes Guy in Real Life, an achingly real and profoundly moving love story about two Minnesota teens whose lives become intertwined through school, role-playing games, and a chance two-a.m. bike accident.

It is Labor Day weekend in Saint Paul, Minnesota, and boy and girl collide on a dark street at two thirty in the morning: Lesh, who wears black, listens to metal, and plays MMOs; Svetlana, who embroiders her skirts, listens to Björk and Berlioz, and dungeon masters her own RPG. They should pick themselves up, continue on their way, and never talk to each other again.

This is a story of two people who do not belong in each other's lives, who find each other at a time when they desperately need someone who doesn't belong in their lives. A story of those moments when we act like people we aren't in order to figure out who we are. A story of the roles we all play-at school, at home, with our friends, and without our friends-and the one person who might show us what lies underneath it all.

Guy in Real Life was a part of this series, as the acronym G.I.R.L, because of Lesh is a guy and he created a toon of Svvetlana, who is a girl. Before I read that, I kinda thought, that it was about showing a guy in his real habitat, you know? But both work for me!

For me, there was a lot of conflict with these kids and their parents. Some of it was the kids acting not so great, but some of it, well, for me espcailly just kinda exitting that phase, was the parents being unreasonable, or being over the top. Yeah.

I really love how these two very different people connected and fell in love. She was a hippie who loved physical gaming, old school, while he was a metal music guy in black who started playing an online game. But they fit together, and that was so sweet!

This was a really fantastic story, and I really enjoyed reading it!