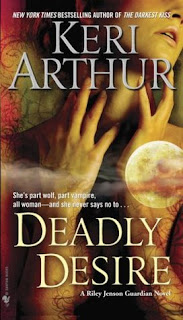 From Goodreads:
Seduction that kills. Pleasure to die for.
She just can't resist . . .

Guardian Riley Jenson always seems to face the worst villains. And this time's no different. For it's no ordinary sorceress who can raise the dead to do her killing. But that's exactly what Riley expects to find at the end of a trail of female corpses used—and discarded—in a bizarre ritual of evil. With pressure mounting to catch one fiend, another series of brutal slayings shocks the vampire world of her lover, Quinn. So the last thing Riley needs is the heat of the upcoming full moon bringing her werewolf hormones to a boil—or the reappearance of a sexy bounty hunter, the rogue wolf Kye Murphy.


Riley has threatened Murphy with arrest if he doesn't back off the investigation, but it's Riley who feels handcuffed by Kye's lupine charm. Torn between her vamp and wolf natures, between her love for Quinn and her hots for Kye, Riley knows she's courting danger and indulging the deadliest desires. For her hunt through the supernatural underworld will bring her face-to-face with what lurks in a darkness where even monsters fear to tread.

My Review:
It's a bit bittersweet reading this book-knowing that there's only 2 more books after this one, and having reading the synopsis' of those books, I have a rough idea of what's going to happen. But this book was just so fantastic to read this book!

I really enjoyed the mystery in this book! There's still some clean up after the last book, but then there's someone using corpses to murder, which is awful, and just plain rude! Of course, that means that she's powerful and has a strong motive for what she's doing! Doesn't mean she isn't bad!

Loved watching Riley as she dealt with it being full moon and all that entails for a werewolf, as well as being around Kye, investigating, and not having much alone time with Quinn! It wasn't easy, and she made mistakes that'll have consequences, but I need to read more!

One big thing, was Kye. Because he's attractive, and there's a spark between him and Riley. But they don't get along. And yeah, to find out that he's her werewolf soul mate...that is not good, but at least she still has Quinn! I need to read more of this amazing series!

More, more, more! Because this book, and this series, is just so freaking great!