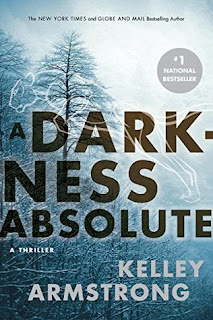 From Goodreads:
People disappear to Rockton so no-one can find them. But the trouble is people also disappear from Rockton. New York Times and Globe and Mail bestselling author and master of thrills Kelley Armstrong returns to Rockton for more page-turning suspense, following her #1 national bestseller, City of the Lost.

It's winter in Rockton, a little town hidden deep in the wilds of the Yukon. The town exists for people who need to escape their pasts, though it's not clear if those in hiding are victims or perpetrators. Or, when the lines gets blurred, maybe both. Ask Casey. She's been used, betrayed, beaten. But she's also killed someone. She moved to Rockton to help her best friend, Diana. Ex-best friend. Diana lied to get Casey to come with her; she used her and she almost got her killed. But Casey decided to stay anyway, to work as a detective alongside her new boyfriend and the town's sheriff, Eric Dalton.

Fresh off solving a series of grisly murders, Casey and Deputy Will Anders get stranded in a blizzard while they're tracking a runner from the town. Seeking shelter in a cave, they stumble across a woman who's been imprisoned in a deep well. Nicole Chavez--whom everybody thought had run away from town and died in the woods more than a year earlier--is alive. Barely. But she can't identify her captor: she's never seen his face.

Was she taken by one of the hostiles who inhabit the wilderness around the town? Or is Casey facing something even worse? In a town where everyone lies about their past and lives under assumed identities, it's very easy to hide your true nature...

My Review:
I absolutely loved reading this book! The first book was absolutely fantastic, and yeah, this one was just amazing! I loved the mystery, it was a bit of a game of cat and mouse, where things didn't make sense, didn't add up, and then they did, and it was just epic to read!

So in this book, we don't leave the immediate area around Rockton. So it was very easy to get lost in this world where those who want to be hidden can be. The council proves to be worse then thought of, because they manipulated so many people, and made it that much harder for Dalton to do his job!

I think my favourite character-besides Casey and Dalton, was Mathias. He was a psychiatrist, focused on criminals, and then had one guy break out and was out to kill him. But in Rockton, he was the butcher. And yeah, he was such a fascinating character! Hope in the future books, we see more of him! Especially with that ending!

I thoroughly enjoyed reading this mystery! There were little clues and hints where it was just information that was just dropped casually, but they were important, and they all came together! And yeah, this guy was pretty tricky! That was unexpected, but was just so great to read!

This book was amazing, and I can't wait to read more of this adult series that is replacing Cainsville, like Cainsville replaced Women of the Otherworld, though it started before Cainsville ended! Yeah, fantastic series! I needs more!