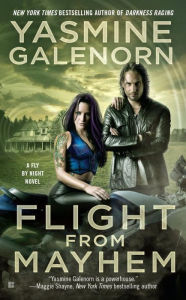 From Goodreads:
I'm Shimmer, a blue dragon shifter. Thanks to a mistake, I was exiled from the Dragon Reaches and sentenced to work for gorgeous, exasperating Alex Radcliffe, a vampire who owns the Fly by Night Magical Investigations Agency. Every time I turn around, somebody's trying to kill us. But you know what they say: All's fair in love and bounty hunting...

A serial killer is stalking the elderly Fae of Seattle, draining their bank accounts before brutally murdering them. When Chase Johnson asks for our help, Alex and I discover that the sociopath is also a doppelganger—able to change shape to match his victim's deepest desires. Our friend and colleague Bette volunteers to act as bait, but the plan goes dangerously awry. Now, unless we find her first, she's about to face her worst nightmare.

My Review:
Yeah! I loved reading this book so much! Because it's back in Seattle, we got much more Bette, which was awesome, because she is awesome! And yeah, again, fantastic being in this world, and with these newer characters! Especially after everything that happened in Darkness Raging!

I was really excited to see where Alex and Shimmer's relationship would head after they got together in Flight from Death! And yeah, this book totally didn't disappoint! What with the case and Bette being in danger, tensions were running high, and it was awesome!

I just have to say, targeting the elderly is a pretty despicable thing to do! Even if by elderly they mean hundreds of years instead of getting close to the triple digits in age, that still doesn't mean that they should be targeted! It's just plain awful!

Taking down this bad guy was just fantastic! Because yeah, like I said, those crimes are just uncool! So yeah, that ending was pretty satisfying. Less so is the fact that I want more of this series, and I'm not sure if there'll be more, since the move to self-publishing. This series was mentioned as one to be continued, but it doesn't have any as of yet! Hopefully (soon) in the future!

Loved this book, and I just would really love more!