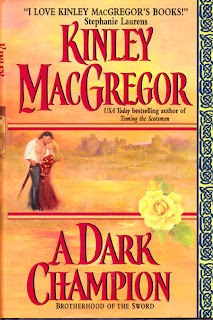 From Goodreads:
Fearless men, their allegiance is to one another, to the oppressed, and to the secret society known as the Brotherhood of the Sword—and they must never surrender to the passionate yearnings of their noble hearts.

A Lady of Love

Beautiful, peace-loving Rowena knows that Stryder of Blackmoor is a warrior, and is therefore a man to be shunned.

But something burns in the eyes of this powerful knight that she has never seen in others of his kind: a tenderness, and a need to love and be loved. Yet to enter his world would be madness—against every principle by which she has lived her life—so she must resist the yearning that would draw her into his arms.

A Man of War

Duty bound to battle for right, Stryder has never desired the comforts of home and hearth—until he gazed upon the exquisite face and form of the incomparable Rowena. He dares not succumb to her sensuous charms, for Stryder is a man sworn to know no love. But when treachery and danger threaten, the noble knight must stand as the unsuspecting lady's champion—though his actions could cost him his honor, his heart. . . and his forbidden dream of happiness.

My Review:
I really enjoyed this book so much! And really enjoying this series so much! It's just so good, so entertaining, which is to be expected of any Sherrilyn Kenyon book! And just the relationship between the peace-loving Rowena, and the knight of the Brotherhood Stryder, it's just so cute!

My only complains are, that they make plans, and then it's never really discussed, like sending away Kit, we don't know how that ended, expect that he was there, and then he wasn't. And they didn't find out who the spy bad guy was! And yeah, the other half, is that they don't really face the bad guy, their relationship ends up all fine, but the bad guy! Nothing really happens there!

There were lots of personal things about the characters that we learn, which was really nice, I really enjoyed learning those things, like the fact of Stryder's parentage, and yeah, all the things that implies, the telling, and the fact itself!

Really enjoyed that Stryder forfeited the physical competition, but then did the poetry one, because that's the one that Rowena is really for, and yeah, though the forfeiting hurt Rowena, in the end, it all worked out, and yeah, it was just so good!

Really enjoyed this book, and that ending, I wonder how that's going to turn out, what with Christian's wife coming and seducing him!