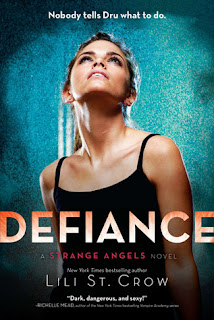 From Goodreads:
Now that sixteen-year-old Dru's worst fears have come true and Sergej has kidnapped her best friend Graves, she'll have to go on a suicidal rescue mission to bring him back in one piece.

That is, if she can put all of Christophe's training to good use, defeat her mother's traitor, Anna, once and for all, and manage to survive another day...

My Review:
This was just such an awesome book! It's the second last one in the series, which means tensions are getting higher, and while Dru's the leader of the council, well, that doesn't mean that things can't go wrong for her, it kinda means the opposite!

Graves has been taken by Sergej, which is just awful (for some reason, my fingers typed awesome, I guess because I use it so much, even when I pretty much meant the opposite) and just imagining what he must be going through was tough on me, let alone Dru!

So of course she wants to rescue him, but that's what Sergej wants, so she'd come to him, and he could end her before she becomes a fully fledged svetocha, well, people want to prevent that. So she has a few obstacles in her path!

Anna. Oh, Anna. To think, that when she was first introduced, she seemed pretty nice. Well, her true colours have been shown, and she is a definite baddie! They just need to beat her, which when it happened, was really great!

I enjoyed this book so much, it was so entertaining and good, and I just want Reckoning now!