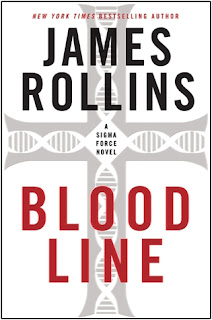 From Goodreads:
In a thrilling masterwork that will make you rethink your perceptions of life and death, "New York Times" bestselling author James Rollins takes you to the edge of medicine, genetics, and technology, revealing the next evolutionary leap forward: immortality--a horrifying truth that is locked inside the "Bloodline"

Galilee, 1025. Infiltrating an ancient citadel, a Templar knight uncovers a holy treasure long hidden within the fortress's labyrinth: the Bachal Isu--the staff of Jesus Christ--a priceless icon that holds a mysterious and terrifying power that promises to change humankind forever.

A millennium later, Somali pirates hijack a yacht off the coast of the Horn of Africa, kidnapping a young pregnant American woman. Commander Gray Pierce is enlisted for the covert rescue mission into the African jungle--for the woman is no rich tourist; she's Amanda Gant-Bennett, the daughter of the U.S. president.

Suspicious that the kidnapping masks a far more nefarious plot, Gray must confront a shadowy cabal, one who has been manipulating events throughout history . . . and now challenges the current presidency.

For this sensitive mission, SIGMA is aided by a pair of special operatives with unique talents: former Army Ranger Captain Tucker Wayne and his military war dog, Kane. But what should be a straightforward rescue turns into a fiery ambush and a deadly act of betrayal as Gray and his team discover that the hostage is a pawn in a shattering act of terrorism with dark repercussions. And the danger is only beginning. . . .

Halfway around the world, a firebombing at a fertility clinic in South Carolina exposes a centuries-old conspiracy to manipulate our genetic code. With time against them, SIGMA must race to save an innocent unborn baby, one who holds the key to a mystery and whose very existence raises questions about the nature of humanity, asking:

Could you live forever?

Would you live forever?

My Review:
This was an utterly spectacular book! The locations! The science! The mystery! The technology! All coming together in a signature James Rollins book, as good as previous book, and better, too, because of the previous books, and yeah, just so good!

The only compliant I have, is that in my copy, is that some pages were printed twice, once before they were printed where they were supposed to, but the first time, they replaced what should've been there, which I didn't catch until I had already read the section, and which meant that I missed the section that was supposed to be there. Which sucked, because it went from them attempted a rescue, to Gray going to assassinate the president.

Yeah, other then that, this book was just so freaking amazing! Like for example, Kane's POV's, he was so smart, and knew a lot of commands, and he did a lot of amazing things, and yeah, that was just freaking cool, because I'm pretty sure it's based off of real live solider-trained dogs.

That ending? With the 1st lady being one of the ones who was a leader of the Guild? And then what the president did to her, keeping her alive but unable to move? Yeah, that was a bit chilling! But apropos, I think, after all that she did!

All in all, a wonderful, amazing addition to the Sigma series!