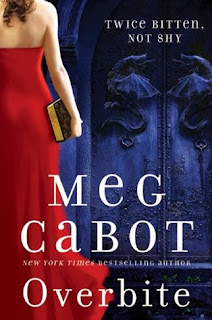 From Goodreads:
Meena Harper has a special gift, but it's only now that anyone's ever appreciated it. The Palatine Guard — a powerful secret demon-hunting unit of the Vatican — has hired her to work at their new branch in Lower Manhattan. With Meena's ability to predict how everyone she meets will die, the Palatine finally has a chance against the undead.

Sure, her ex-boyfriend was Lucien Antonescu, son of Dracula, the prince of darkness. But that was before he (and their relationship) went up in flames. Now Meena's sworn off vampires for good ... at least until she can prove her theory that just because they've lost their souls doesn't mean demons have lost the ability to love.

Meena knows convincing her co-workers — including her partner, über-demon-hunter Alaric Wulf — that vampires can be redeemed won't be easy ... especially when a deadly new threat seems to be endangering not just lives of the Palatine, but Meena's friends and family as well.

But Meena isn't the Palatine's only hope. Father Henrique — aka Padre Caliente — New York City's youngest, most charming priest, has also been assigned to the case.

So why doesn't Meena — or Alaric — trust him?

As she begins unraveling the truth, Meena finds her loyalties tested, her true feelings laid bare ... and temptations she never even imagined existed, but finds impossible to resist.

This time, Meena may finally have bitten off more than she can chew.

My Review:
This was a really great sequel! And the ending, it was really good, because it's kinda open for more sequels, but not really with threads from these first 2, but it can also serve as the end of the series (but I would prefer more books in this series!)

I loved being in this world again, and how Lucien was being counselled to leave New York, but how he was going to stay with the river, to make himself evil again. Meanwhile, one of the things that Meena is doing, is to prove that he can choose to be good, since it's half of his heritage, that from his mom.

Meena is having a tough time. First her ex-boyfriend is coming at her, trying to kill her via draining her blood, and then Lucien kills him, and when they go to ex-boyfriend's wife, well, yeah, more vampires. And then she has to deal with the ex-boyfriend's parents. Not fun.

There's a really bad guy in all this, directing things behind the scenes, and yeah, he's also causing trouble by himself, seeing as he's Father Henrique, and how he tried to kill Alaric, and Alaric decides to blow the place up to escape, that was pretty hilarious!

Loved this book so much, and I'm really hoping for a sequel!