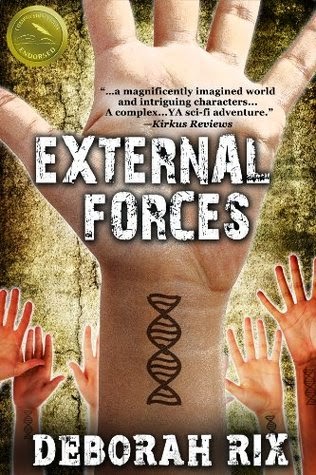 From Goodreads:
It’s 100 years since the Genetic Integrity Act was passed and America closed its borders to prevent genetic contamination. Now only the enemy, dysgenic Deviants, remain beyond the heavily guarded border. The Department of Evolution carefully guides the creation of each generation and deviations from the divine plan are not permitted.

When 16-year-old Jess begins to show signs of deviance she enlists in the Special Forces, with her best friend Jay, in a desperate bid to evade detection by the Devotees. Jess is good with data, not so good with a knife. So when the handsome and secretive Sergeant Matt Anderson selects her for his Black Ops squad, Jess is determined to figure out why.

As her deviance continues to change her, Jess is forced to decide who to trust with her deadly secret. Jess needs to know what’s really out there, in the Deviant wasteland over the border, if she has any hope of making it to her 17th birthday. Because if the enemy doesn't kill her first, the Department of Evolution probably will.

My Review:
This book, I have epic love for! It was just so entertaining, and I enjoyed everything about it! It was frustrating, this world, raised by blood pressure, I'm pretty sure, because the way the world is set up, it's extremely unfair!

I enjoyed Jess and her deviance, a lot! It was just so entertaining! Because that made her the good guy more then ever, seeing as she's the main character! And yeah, as things went on, they got pretty interesting!

I loved the dynamic between Jess, Jay, and Matt! It was just awesome, because there's something between Jess and Matt, and then Jess and Jay have been friends for like, forever. So that was a really interesting dynamic!

I enjoyed this book so much, I reread bits, to make sure I got every detail, and yeah, it was just that good, and I can't wait for the next book! 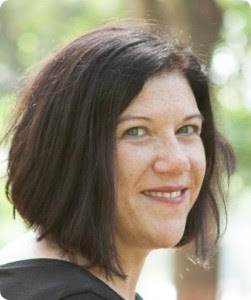 Bio:
Deborah Rix’s favourite position for reading a book is head almost hanging off the couch and feet up in the air with legs against the back of the couch. She’s been reading too much from Scientific American for research and ideas and needs to get back to some fiction. She has a long standing love of science fiction, some of her favourite authors include William Gibson, Philip K Dick, Kurt Vonnegut Jr, Douglas Adams, Iain M Banks. A bit old school.

Deborah enjoyed a successful career in entertainment publicity, live music promotion and event management. Which means she slogged through muddy fields for music festivals, was crammed into concert halls with too many sweaty teenage boys and got to go to Tuktoyaktuk (that’s in the Arctic Circle) for a Metallica concert. She lives with her family in Toronto, Canada, where she is the proprietor of The Lucky Penny, a neighborhood joint in Trinity-Bellwoods.

External Forces is her first novel. 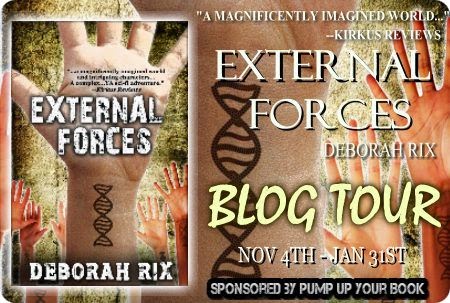 Stops on the Tour:
Monday, November 4
Interview at Blogcritics

Friday, November 15
First Chapter Reveal at Pump Up Your Book

Wednesday, November 20
Interview at Beyond the Books

Thursday, November 21
First Chapter Reveal at As the Pages Turn

Book Featured at To Read, or Not to Read
Tuesday, November 26

Book Trailer of the Week at Pump Up Your Book
Wednesday, December 4

Book Featured at Queen of All She Reads
Thursday, December 5

Interview at As the Pages Turn
Thursday, December 12

Book Featured at Hanging Off the Wire
Tuesday, December 17

Friday, December 20
Book Featured at Between the Covers

Monday, January 6
Interview at Pump Up Your Book

Wednesday, January 15
Book Featured at The YA Lit Chick

Monday, January 20
Book Featured at Once Upon a YA Book

Thursday, January 23
Book Featured at As the Page Turns