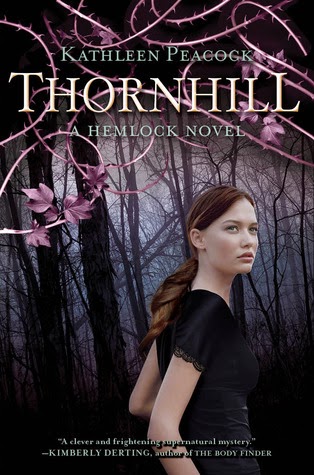 From Goodreads:
Mac can't lose another friend. Even if he doesn't want to be found.

The ripple effect caused by Mac's best friend Amy's murder has driven Mac's new love, Kyle, to leave Hemlock and disappear from her life forever. But Mac knows that Kyle plans to enroll in a rehabilitation camp, where he can live with other werewolves. She refuses to accept his decision, especially since the camps are rumored to be tortuous. So she sets out in search of Kyle with a barely sober Jason—and Amy's all-seeing ghost—in tow.

Clues lead Mac to find Kyle in a werewolf den in Colorado—but their reunion is cut short by a Tracker raid. Now Mac and Kyle are trapped inside the electric fences of Thornhill, a camp for young werewolves. As she devises an escape plan, Mac uncovers dangerous secrets buried within the walls of Thornhill—and realizes that the risk to the people she loves is greater than ever before.

My Review:
This book! Just massive feels for it! I mean, after the massive cliffhanger of Hemlock, the need to read this book was pretty intense! And this book just kicked off, and things were happening! It was just so awesome!

I loved the dreams of the ghost of Amy, some more, like the last book, they were just so important, to Mac, and to the series, because Amy's murder is what kicked off the series, and yeah, it makes you wonder, if she hadn't have been killed, then would any of this happen? Or just parts.

So Thornhill. I'm kinda liking the theme of the titles, that Hemlock was the name of their town, and then Thornhill is where they are for the majority of the book. Which, on another note, was interesting to explore, new territory and all, though not so nice territory!

Between Mac, Kyle, and Jason, there was a lot of snarking and sarcasm going back and forth! And conflicts, because they are in this high stress situation, one that teens really shouldn't be in, and then add in romantic feelings in the mix, things get dangerous there!

I enjoyed this book so much, and I can't wait for Willowgrove!