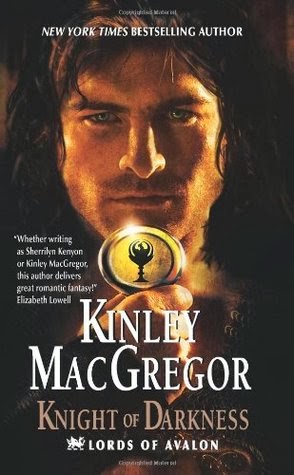 From Goodreads:
For countless centuries, I've been the assassin for the infamous Merlin, even though the woman who birthed me sits at the right hand of our enemy, Morgen le Fey. Now both my mother and Morgen have decided that it's time I take my place on their side of this conflict.

Normally, telling them no wouldn't be a problem, except for the fact that the good guys I protect think that I'm an even worse demon than the ones we fight. Hmm, maybe they're right. I have to say that I do enjoy maiming anyone who gets in my way.

At least until my mother gives me a simple choice: join Morgen's Circle of the Damned or see an innocent woman die. I'm all for saving the innocent, but Merewyn isn't as innocent as she seems. And she's none too fond of the fact that her fate is in my dubious hands. Personally I'm all for taking the easy way out, but leaving her to Morgen is rough, even for me. Now the only way to save both our lives is to face the evilest forces ever known—my mother and Morgen. And two people who know nothing of trust must learn to rely on each other or die: provided we don't kill each other first.

My Review:
I loved rereading this book so much! It's trademark Sherrilyn Kenyon, paranormal, and tortured characters, and romance! It's just so good, and then when you add the particulars of each book that makes it distinct from the others, that's just magical! I love her books!

I really loved Merewyn and Varian's story! It's just awesome, and I just loved where it went, and who they had with them! It was just so entertaining, with the snark that is just the best of Sherrilyn Kenyon's books that I love!

I felt bad for Merewyn, she was in a bad situation, and she made a really bad deal. And then she made, if it hadn't worked out like it did, a worse one, but since it ended up all good, a pretty great deal!

Then there's Varian, who's parents were just evil to him, seeing as one's evil, his mom, who tricked his dad into being with her, and his dad was on the side of good. But he wasn't nice at all to Varian, and his other son, either.

I just loved this book so much, and rereading it was awesome, I really hope we get more books in this series!