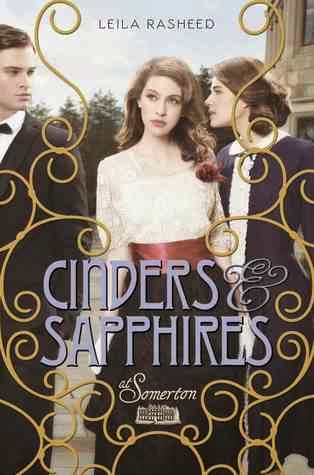 From Goodreads:
One house, two worlds...

Rose Cliffe has never met a young lady like her new mistress. Clever, rich, and beautiful, Ada Averley treats Rose as an equal. And Rose could use a friend. Especially now that she, at barely sixteen, has risen to the position of ladies' maid. Rose knows she should be grateful to have a place at a house like Somerton. Still, she can't help but wonder what her life might have been had she been born a lady, like Ada.

For the first time in a decade, the Averleys have returned to Somerton, their majestic ancestral estate. But terrible scandal has followed Ada's beloved father all the way from India. Now Ada finds herself torn between her own happiness and her family's honor. Only she has the power to restore the Averley name-but it would mean giving up her one true love ... someone she could never persuade her father to accept.

Sumptuous and enticing, the first novel in the At Somerton series introduces two worlds, utterly different yet entangled, where ruthless ambition, forbidden attraction, and unspoken dreams are hidden behind dutiful smiles and glittering jewels. All those secrets are waiting ... at Somerton.

My Review:
I enjoyed this book so much! It was entertaining, and I loved the shifting POV's, we could see so must more, of all the sides of what was going on, that was just fantastic! And the twists in this book! So awesome!

I enjoyed all this around the Averley family, the dad is getting married to a lady with kids, things about a maid, daughter of a pretty high up servant, and the one sister having a crush on a guy, which it turns out that he's gay. There was just a lot going on!

One of the best things in this book besides the above, for me, was the detail. It was lush, and perfect, and I could really believe that was what it was like then, for everybody's types that was shown, from servant to those of noble blood. It was just so entertaining!

That ending? With Rose being the illegitimate daughter? I mean, there were hints, and then it was revealed in a not so nice manner, but the way that her dad acted after that, and his actions, to now raise Rose as his own? Pretty scandalous, but I think he made the right choice!

I enjoyed this book a lot, and I'm going to have to read more of the series!