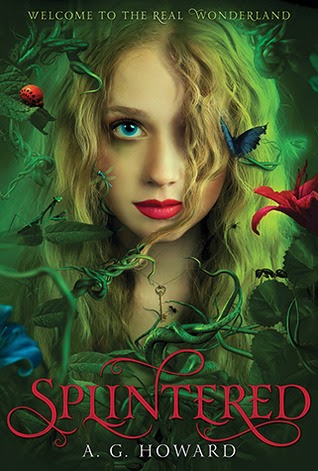 From Goodreads:
This stunning debut captures the grotesque madness of a mystical under-land, as well as a girl’s pangs of first love and independence. Alyssa Gardner hears the whispers of bugs and flowers—precisely the affliction that landed her mother in a mental hospital years before. This family curse stretches back to her ancestor Alice Liddell, the real-life inspiration for Lewis Carroll’s Alice’s Adventures in Wonderland. Alyssa might be crazy, but she manages to keep it together. For now.

When her mother’s mental health takes a turn for the worse, Alyssa learns that what she thought was fiction is based in terrifying reality. The real Wonderland is a place far darker and more twisted than Lewis Carroll ever let on. There, Alyssa must pass a series of tests, including draining an ocean of Alice’s tears, waking the slumbering tea party, and subduing a vicious bandersnatch, to fix Alice's mistakes and save her family. She must also decide whom to trust: Jeb, her gorgeous best friend and secret crush, or the sexy but suspicious Morpheus, her guide through Wonderland, who may have dark motives of his own.

My Review:
This book was just really awesome! I loved the, for me, 2 big twists in this book, they were smart, the clues were there, and yeah, they really helped the story! I enjoyed having Alyssa having to make that choice between Jeb and Morpheus, because, yeah. Conflict!

That Alyssa and her family is descended from Alice, well, yeah, that's something to say! And then to have to fear the crazy, because of Alice? Not fun at all. And to have some people in her life that mock Alyssa for that, not fun!

So the whole having to fix Alice's mistakes, those tests, that was just really creative, especially the beginning ones, where she didn't know she was being tested. And once she did, it got a bit more complicated. And then when it turns out that it wasn't a test, but a guideline for something else? Yeah, one of those two twists!

That ending! I could see Jeb going back, and being like that, and how it ended. And I know it's the first book in the series. So I expect a good deal of this ending, is going to kick off some more conflict. And I'm excited for that!

I enjoyed this book so much, it was creepy and strange and awesome, and I can't wait for more!