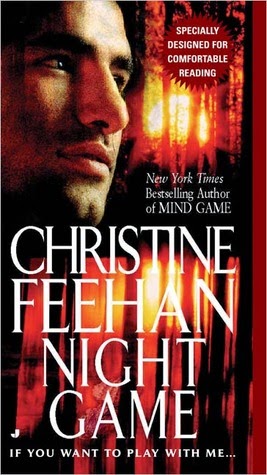 From Goodreads:
Gator Fontenot of the Special Forces paranormal squad must reel in the elusive Iris "Flame" Johnson, a victim of the same horrific experiments that warped Gator--and a red-haired weapon of unimaginable destructive powers bent on revenge in the sultry bayous of New Orleans. But can two people haunted by violent betrayals trust the passion that soon ignites between them? Or is one of them just playing another seductive and deadly night game?

My Review:
I enjoyed this book so much! I enjoyed getting to know Gator and Flame again, because yeah, it's been forever since I first read their story, and I'm rereading the whole series, and I just want to have more!

It's this book, with Mind Game before it, that we really, truly realize what a monster Whitney was. I mean, in Shadow Game, he was almost a victim, too, and Lily was raised by him, she thought he was good. But in Mind Game, there's what he did, and then here, how he gave Flame cancer, again and again? Just proved the depth of his depravity!

So I really enjoyed them taking down the bad guy! It was really nice, them using their gifts, and yeah, all the things that lead them to doing that, it was just fantastic! He totally deserved what he got! And as a bonus, there was developments with finding Whitney, too!

I enjoyed how this book ended, which Flame going through hopefully her last time through of chemo, and then just how their relationship dealt with that, and how they moved foward, it was just perfect! Just showed how strong and in love the two of them are!

Loved this book so much, can't wait to reread more!