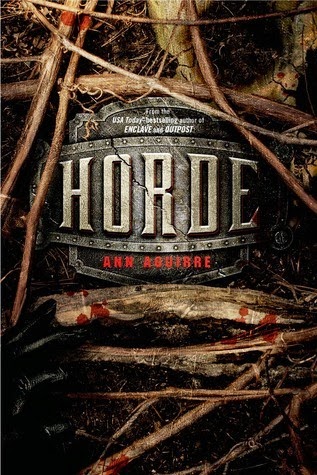 From Goodreads:
The horde is coming.

Salvation is surrounded, monsters at the gates, and this time, they're not going away. When Deuce, Fade, Stalker and Tegan set out, the odds are against them. But the odds have been stacked against Deuce from the moment she was born. She might not be a Huntress anymore, but she doesn't run. With her knives in hand and her companions at her side, she will not falter, whether fighting for her life or Fade's love.

Ahead, the battle of a lifetime awaits. Freaks are everywhere, attacking settlements, setting up scouts, perimeters, and patrols. There hasn't been a war like this in centuries, and humans have forgotten how to stand and fight. Unless Deuce can lead them.

This time, however, more than the fate of a single enclave or outpost hangs in the balance. This time, Deuce carries the banner for the survival of all humanity.

My Review:
Wow, I enjoyed this book so much! So good to read this book, it was a great ending to the series, it ended it just a great place, and yeah, I really enjoyed the journey to get there! And I know I'll have to reread this series, because I haven't read all the short stories with it yet!

So this one picks up pretty quickly after where Outpost ended, and yeah, this book is mostly action, with lots of discoveries, battles, reunions, and yeah, some characters deaths that we didn't want, but happened anyways!

Deuce has been growing in this series, she's more than the Huntress that she was in Enclave, and that's a good thing, she's seen more of the world, and now she's ready to really take it on, head on. And yeah, what a battle!

That ending! We get so many answers to questions that it seems that we've had forever, and yeah, that was really satisfying to get that, I just loved that so much! And then add in the action, and it was a perfect ending!

I really enjoyed this book so much, this was such a great trilogy, and I recommend it to any YA dystopia fans!