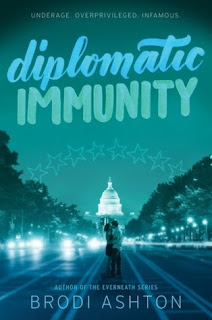 From Goodreads:
Anna and the French Kiss meets The Disreputable History of Frankie Landau-Banks in a romantic and hilarious new novel from Brodi Ashton, the author of the Everneath trilogy.

Piper Baird has always dreamed of becoming a journalist. So when she scores a scholarship to exclusive Chiswick Academy in Washington, DC, she knows it's her big opportunity. Chiswick offers the most competitive prize for teen journalists—the Bennington scholarship—which would ensure her acceptance to one of the best schools in the country.

Piper isn't at Chiswick for two days before she witnesses the extreme privilege of the young and wealthy elite who attend her school—and realizes that access to these untouchable students just might give her the edge she'll need to blow the lid off life at the school in a scathing and unforgettable exposé worthy of the Bennington.

The key to the whole story lies with Rafael Amador, the son of the Spanish Ambassador—and the boy at the center of the most explosive secrets and scandals on Embassy Row. Rafael is big trouble—and when he drops into her bedroom window one night, asking for help, it’s Piper's big chance to get the full scoop. Except Piper discovers that despite his dark streak, Rafael is smart, kind, funny, and gorgeous—and she might have real feelings for him. How can she break the story of a lifetime if it will destroy the boy she just might love?

My Review:
This book! I enjoyed this book about journalism and diplomatic immunity, and falling love with the subject of the expose you're writing! It was such a wonderful and entertaining story! And the first contemporary YA book by Brodi Ashton! I can't wait to read what she writes next (while impatiently waiting for My Lady Jane later this month!)

I really enjoyed reading this book! Piper was n interesting character, she wanted to win the Bennington so she could go to Columbia for Journalism. And her ticket? Rafael, bad boy with diplomatic immunity. Who got away with most everything.

Things weren't always what they seemed-DI's only get two strikes and your out. But those strikes have to be pretty bad. And yeah, he shared some pretty intimate details of his life-that she put in her article. Which leads to the next paragraph!

Gah, but it was actually hard to read the last 3rd of this book. Because I read the ending before then, and I knew what was coming, and I could see it coming, but I wanted to avoid it, but I couldn't, it was a part of this story! I read it, but it was hard-I don't like awkward conflicts, they scare me! But it ended well in the end, so I was happy!

This was a really wonderful, amazing book, and I can't wait to read more by Brodi Ashton!