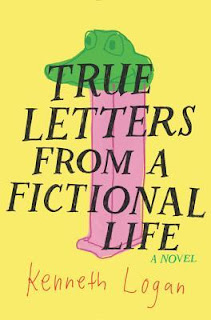 From Goodreads:
A thoughtful, authentic coming-out story about a high school boy who can only deal with his own truth through secret, unsent letters.

If you asked anyone in his small Vermont town, they'd tell you the facts: James Liddell, star athlete, decent student, and sort-of boyfriend to cute, peppy Theresa is a happy, funny, carefree guy.

But whenever James sits down at his desk to write, he tells a different story. As he fills his drawers with letters to the people in his world—letters he never intends to send—he spills the truth: he's trying hard but just isn't into Theresa. It's his friend, a boy, who lingers in his thoughts.

James's secret letters are his safe space—until someone leaks them, and words he never meant to share are being broadcast all over school. Will he come clean to his parents, his teammates, and himself or is he destined to live a life of fiction?

My Review:
Reading this book was really awesome! A story about being gay in a small town, where one of the only other person who was gay-but out-was beat up and sent to the hospital, most likely because he was gay. Yeah.

I enjoyed James, he was pretty smart, and he was a mix of kind and mean, because of peer pressure, because he was afraid. Basically the all american boy, 2.0, because he's gay. This should be a thing, that being gay is something that's accepted, and people are fine with it, because honestly? It's not bad. It doesn't harm anyone in an of itself-mostly, they're harmed just because they're different. And that's not fair. Which is a bit ramble-y, but yeah.

As the title suggests, the letters are true, what he's really thinking and feeling, and about what was happening, what was on his mind, to those that were a part of whatever had happened for him to start that letter.  And they were things that weren't right, or were on his mind. And that was really great!

The way he came out, wasn't exactly by choice, since some of the letters were stolen. And who did that, that was something that was a bit of a mystery. One that had a surprising twist, and one that hurt, but it worked, and in the end, he was happy and with a great guy, so that was good!

Really fantastic book, and I can't wait to read more by Kenneth Logan!