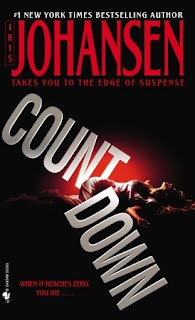 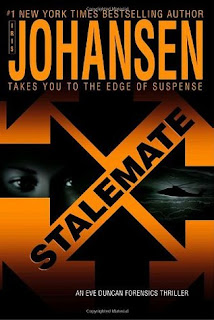 From Goodreads:
When it reaches zero, you die.

#1 New York Times bestselling author Iris Johansen sets her readers' pulses racing once again in this relentless psychological thriller of a young woman caught in a maze of secrets and stalked by a merciless killer. The countdown begins the moment you open this riveting novel that only grows more electrifying as the pages turn, more exciting as time runs out. . . .

"Don't kill her. She's no good to us dead." These words haunt Jane MacGuire after a shocking attack shatters her world in an instant. Was it a random kidnapping attempt–or the countdown to something far more sinister?

Who is after her–and what do they want so badly they'll kill anyone in their way? That's what Jane is determined to find out, without the help of the police, the FBI, or her adoptive parents, forensic sculptor Eve Duncan and her husband, Joe Quinn, of the Atlanta PD–because whoever is after her won't hesitate to hurt those she loves the most. Now Jane will go on the run with the only man who may be more dangerous than those who are pursuing her. A smuggler, a con man, and who knew what else, Mark Trevor had his own mysterious reasons for wanting to keep Jane safe and out of the hands of a killer obsessed with a two-thousand-year-old mystery that could rock the modern-day world.

Orphaned at an early age, Jane grew up the hard way, but she was given a new life, a loving family, and a chance to pursue her interest in one of the greatest archaeological finds ever unearthed. Now someone was trying to destroy that new life before it could even get started. The past is returning with the kind of vengeance that knows no mercy. The countdown has already begun, and it's approaching zero faster than anyone thinks.

From Goodreads:
Eve Duncan has turned down the job twice already. Her skill and devotion in identifying murder victims and helping bring their killers to justice may be world-renowned. But Eve works exclusively for law enforcement and the families of the innocent, and the man on the other end of the phone is many things—none of them law-abiding or innocent.

One of the world's most wanted men, little is really known about Luis Montalvo except that he is extraordinarily dangerous and that he never takes no for an answer. Now he wants Eve's help in the worst way. For he believes they have something in common—and he's about to prove it with a grisly warning.

Eve will leave everything and everyone behind, even the man she trusts and loves the most, Atlanta detective Joe Quinn, to travel to Montalvo's luxurious armed compound in the Colombian jungle to identify the skull he has recovered. She has agreed to this devil's bargain to save an innocent family, but also for a reason she can't admit to Joe, to the CIA, to anyone. For the man in the jungle has promised to be able to give Eve what she wants most of all—the key to unlocking the darkest and most painful mystery of her past.


But Eve is in more danger than she can imagine. As she gets closer to identifying the skull, she finds herself caught between two ruthless killers with no way out. Now, with everything on the line, Eve Duncan must make the most chilling choice of all. And if she's wrong…she's dead.

My Review:
I love reading Iris Johansen books. They're amazing thrillers and mysteries and romances, all packed into 300 to 500 pages. Just bad luck that the 500 page book was the one in the bag with the leaking scent packet!

Countdown is almost like a continuation of Blind Alley, but with Jane at the focus instead of Eve. Because it also deals with Cira, and Jane has more dreams of Cira escaping the tunnels. An of course, Trevor. And with a few bad guys to face, well, yeah. I kinda suspected Mario, but not how far he went! And that MacDuff was an ancestor of Cira. But I forgot that they didn't find the gold! Or that Jane is maybe related to MacDuff and Cira!

Countdown is the first book with Venable in it! And then to have his first story with Eve and Quinn! Because this is a pretty important relationship, it's why she becomes friends with Catherine, and some of her other adventures! I can't wait for more!

Montalova was really interesting. And knowing that he's going to supply a bad guy for either Quicksand or Blood Game, well, yeah, it was great to have his story! And the bad guy, oh, wow, I was really glad when he got what was coming to him! It really pushes my buttons when bad guys say derogatory names of women and children. I mean, come on!

Loved reading these books, and I can't wait to read more! I have a week to get up to Night and Day, because I got it from NetGalley, and I want to read it before it comes out! Hopefully I can make it!