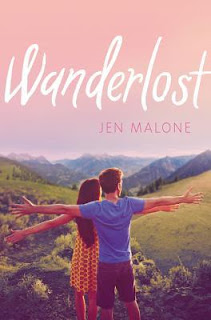 From Goodreads:
Not all those who wander are lost, but Aubree Sadler most definitely is on this novel's whirlwind trip through Europe. A romantic and charming YA debut perfect for fans of Stephanie Perkins and Jenny Han.

Aubree can't think of a better place to be than in perfectly boring Ohio, and she's ready for a relaxing summer. But when her older sister, Elizabeth, gets into real trouble, Aubree is talked into taking over Elizabeth's summer job, leading a group of senior citizens on a bus tour through Europe.

Aubree doesn't even make it to the first stop in Amsterdam before their perfect plan unravels, leaving her with no phone, no carefully prepared binder full of helpful facts, and an unexpected guest: the tour company owner's son, Sam. Considering she's pretending to be Elizabeth, she absolutely shouldn't fall for him, but she can't help it, especially with the most romantic European cities as the backdrop for their love story.

My Review:
This book was so fun to read! Starting with getting her hair caught in the pantry, having her sister getting arrested for leading the cop out but him saying she assaulted him, to Aubree impersonating her sister on this multi-country tour, yeah, so great!

There were a lot of funny moments. Like the antics that the customers got into, because yeah, they've lived longer lives, and this is their reward-acting pretty of of wack with the people around them!And ones that were harder. Like losing most of her stuff pretty much as soon as she arrived at the airport.

I really enjoyed all these places that they went to! They were interesting, and yeah, it was getting a dose of history and culture without leaving my home, which is preferred. Doing them in person is not something I like-I would rather read!

Of course the impersonation thing had to come out, and that caused a bit of a snag, especially since she was falling in love with the tour company owner's son, Sam, who also had his grandmother along. Yeah, that was really a situation!

Loved how it ended, how it all worked out, and that she would continue travelling, because yeah, she grew confident over this book, and that was a great journey! Loved reading it!