Week 26 Reviews: The Laughing Corpse, Circus of the Damned 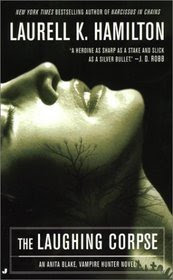 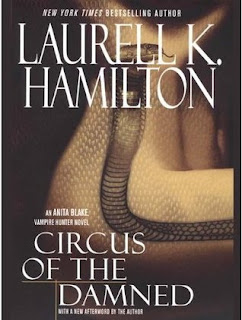 From Goodreads:
Harold Gaynor offers Anita Blake a million dollars to raise a 300-year-old zombie. Knowing it means a human sacrifice will be necessary, Anita turns him down. But when dead bodies start turning up, she realizes that someone else has raised Harold's zombie--and that the zombie is a killer. Anita pits her power against the zombie and the voodoo priestess who controls it.

In The Laughing Corpse Anita will learn that there are some secrets better left buried-and some people better off dead...

From Goodreads:
Anita Blake never knows quite what is going to turn up walking the mean streets she lives on. She really does not appreciate the sexual attentions of Jean-Claude, vampire Master of the city she lives in and proprietor of the Circus of the Damned. No matter how cute he is, he is dead, and Anita gets enough of dead people in her work as zombie raiser and vampire executioner.

His friend Richard strikes her as entirely more her sort of thing--sweet, polite and a high-school teacher; yet she knows with an awful inevitability that Richard probably has secrets of his own. Add to this volatile personal mix vampires with ambitions to seize Jean-Claude's throne and mount anti-human pogroms, an immortal snake-woman with agendas of her own and a hit-man with a contract on whoever the Master happens to be at the time, and Anita's problems start to be as entertaining and suspenseful as ever.

Hamilton takes us to dark caverns and overlit night-clubs, and to the darker places that live inside human and formerly human sexuality--her books are terrific supernatural thrillers because she is keen to explore sexual heat as well as terror and excitement.

My Review:
I really enjoyed reading these books! It took me awhile to get around to reading them after reading the first book, plus knowing that the series is going to go in a very different direction, but I did read them, and they were so fantastic!

Anita explores her powers in these books as she's also investigating the murders. And she learns some pretty interesting facts, like if they try to animate a corpse who had similar powers in life, things go wonky! I enjoyed this element of the books a lot!

I read that Laurell K. Hamilton tried to write out Jean-Claude out in Circus of the Damned, and then I think book 8. I'm glad that she didn't, because he's a complex character, and he provokes Anita, which is something she needs.

It's funny, there's all these different threads that are being pulled throughout the novels, and when you get to the start, it's almost always connected together, most of the pieces. In a way, that's easier, but it proves to the deviousness of the bad guys, because some of these threads seemed totally unconnected!

I really enjoyed reading these books, and I can't wait to read more!

Circus of the Damned: