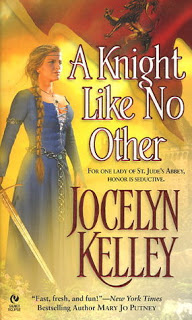 From Goodreads:
For one lady of St. Jude's Abbey, honor is seductive.
In twelfth-century England, St. Jude's Abbey is no ordinary sanctuary of prayer and ritual. Established by Eleanor of Aquitaine, it trains young women in the knightly arts, as well as martial arts from the East. In times of trouble, these formidable women are called upon to protect the royal family and England. Avisa de Vere is one such woman...

Even behind the abbey walls, Avisa has heard of the conflict between the king and the Archbishop of Canterbury. And the queen has commanded her to keep her majesty's cherished godson, Christian Lovell, from entering the fray.

When Christian "rescues" a damsel in distress on his way to Canterbury, he has no idea the fair-haired beauty was sent to protect him. He has never before known a woman who carries her own broadsword. And when Avisa asks him to help rescue her sister, he has no choice but to follow her.

Avisa soon learns Christian is a knight of great honor and courage — and finds herself weak at his touch. Desire is a battle she was not taught to fight — and the wisest course may be surrender...

My Review:
This book was hilarious! I guess I should've expected that from the title, taking the pun of knight and night and all. But I didn't expect it to be as funny and great as it was! This was a really amazing book! So awesome!

The idea that Eleanor of Aquitaine created an all-female abbey for the purpose of training the ladies how to fight, is amazing. From various bits of collected information, this is set about 20 years before Robin Hood, at least, the legend. So it's a different attitude, and I loved reading about ti!

There was a lot of friction between Avisa and Christian. She's been charged with protecting him-and does so by using his instincts to protect her. Plus, she knows what's going on while he doesn't, while he's also dealing with the fact that his dad was branded a coward. Of course they'd get on swimmingly!

So much was going on in this book! There was the deception that Avisa gave, Christian's brother Guy who was something of a pig, Avisa's dad, and the king's orders. It all led to a very entertaining book, and I just loved reading it!

Such an amazing book, and I can't wait to read more of this series!