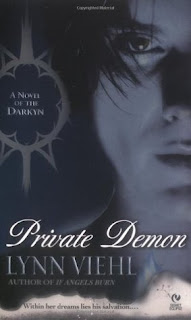 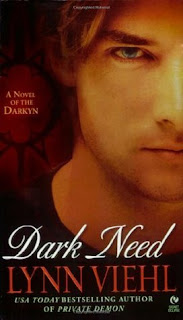 From Goodreads:
A WEAKENED BODY...
Jema Shaw is an antiquities expert. But she moonlights as a police forensic consultant--to escape an existence trapped between her domineering mother and the mysterious illness that's plagued Jema for years.

A WOUNDED SPIRIT...
Thierry Durand was tormented body and soul by his people's greatest enemies--and by his wife's betrayal. His only hope for healing lies in Jema's heart.

THEIR DREAMS CAN COME TRUE....
Night after night, Thierry slips into Jema's dreams, fulfilling her deepest, darkest desires. In the arms of her private demon lover, Jema finds that her fantasy is becoming more important to her than anything in reality. But Thierry's sensual visits have placed her in the cross fire between two ancient enemies: a religious order known as the Brethren and a cadre of immortals known as the Darkyn...

From Goodreads:
Homicide detective Samantha Brown is a tough, highly decorated cop. But twelve lonely years after she nearly died of a gunshot wound, she aches with a deep inner longing. In pursuit of a deranged killer, her only clue is a medieval cross inscribed "Lucan"-the name of the owner of a new nightclub near the murder scene. Drawn into a seamy underworld, Samantha falls for Lucan-who believes he's a vampire and Samantha is his reincarnated first love. Now, she must save this mysterious, seductive man who seems beyond redemption if he is to fulfill her deepest, darkest desires.

My Review:
I really, really enjoyed reading these books! I mean, I read them before, but that was around 6 years ago, and somehow, I manged not to blog about them, even though I did the first book in the series! So weird! Anyways!

It did take me a bit longer than I would've liked to get around to reading Private Demon, but once I did, I just dove right in, and then I needed more so I read Dark Need. I would've read more, but since I read this at the beginning of my week, I decided to give other books a chance, and pick up this obsession next week!

This series did get a bit mixed up in my head, so I had to fight my ideas about what was going to happen, because I thought the events of the last book (I'm pretty sure, now) were in the first. So that was a very interesting time, watching Thierry and Jema! And Sam and Lucan! And Alex and Michael!

I didn't really like Lucan, again, because he was just a bit too crass, and his actions were pretty bad. Of course, he had a good explanation, but things didn't quite go as planned! Which means, that going back a bit, well, both books had pretty explosive and awesome endings! I loved how things turned out!

Reading these book was just the best, and I can't wait to read more!