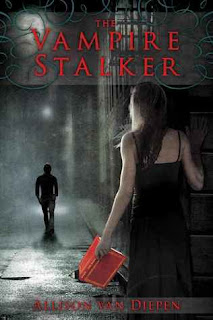 From Goodreads:
What if the characters in a vampire novel left their world--and came into yours?

Amy is in love with someone who doesn't exist: Alexander Banks, the dashing hero in a popular series of vampire novels. Then one night, Amy meets a boy who bears an eerie resemblance to Alexander. In fact, he IS Alexander, who has escaped from the pages of the book and is in hot pursuit of a wicked vampire named Vigo. Together, Amy and Alexander set out to track Vigo and learn how and why Alexander crossed over. But when she and Alexander begin to fall for each other, Amy wonders if she even wants him to ever return to the realm of fiction.

My Review:
Such an amazing book! So good! Loved the idea of it, and I wish it could happen to me, that a character could come out of the book, and then be with me! That would just be so fantastic!
I loved the story, and the characters were so nice, and good, and really likable!

I think that somebody should write the Otherworld books, just simply so that we could see most of the characters as they had been before The Vampire Stalker, and then after! That would just be really funny, and kinda like the way that somebody wrote the Castle books that were "written" in the show Castle. Which you should watch if you haven't. Yep.

I just really loved this book, read it at the library, and was done in about 2 hours! So good! I want to read more!

You guys really need to read it if you haven't, simply because it's so good!